The pattern which seems to be governing this terrifying-pandemic is that of differential damage, imposing massive damage and losses on groups which are non-tributaries to a particular power structure.
The US seeks to impose unlimited losses upon Chinese interests. Fear must remain in place at home, to assure compliance of the masses, so actual cures, or relief from fear are banned on YouTube for going against WHO/CDC edicts.
WHO/CDC have been harmful, not helpful to public health, to date.
The overarching need of the current elites is to maintain power and control through this crisis, preferably to increase it.
That form of insecurity and grasping too hard, while obscuring or outlawing remedies they don't control SHOULD be their downfall. We'll see how this plays out.
Let me clarify that I see all elites as amoral and self serving.
None of them appear to represent the interests of life on Earth. Sociopaths all the way down...
I'm backing cheap public health measures like vitamin-D, zinc, NAC and growing fresh vegetables.

Craig Murray points out that only PROFITABLE "solutions" to this crisis will be considered by the financial masters.
Please submit conforming proposals!
...the UK and the US are attempting to hide their vaccine and treatment research results from the rest of the world to make money out of them.
​  ​Much has been written about the possibility for a new and better kind of world to emerge after coronavirus. Yet our governments cannot conceive of any model for fighting this threat to the whole world, other than the capitalist, money-making model. The much-touted “race to develop a vaccine” is not a race to save lives. It is a race to make billions.
​  ​The United States and the United Kingdom are working in all international fora to head off efforts to pool global research and to make any vaccine or medicine a good for the world.

Donald Trump announces that he is taking hydroxychloroquine and zinc prophylactically against coronavirus.
I hope he is also taking vitamin-D.
https://www.zerohedge.com/health/trump-admits-taking-hydroxychloroquine-zinc

There is a subset of people, who do not recover, who seem to get chronic migrating viral symptoms from SARS-CoV-2 infections. This is a persistent percentage who only mostly recover, but remain effectively crippled and miserable.
https://www.theguardian.com/world/2020/may/15/weird-hell-professor-advent-calendar-covid-19-symptoms-paul-garner

Mass slaughter of living beings brings misery to all involved... Essential slaves, and their owners, included.
​  ​Even while meat companies say they are stepping up safety protocols as facilities reopen, coronavirus keeps spreading at almost twice the national rate in U.S. counties with major plants​...

​ In counties with major slaughterhouses that have less than 1 million people, there was a 31% increase in confirmed cases for the week. Those 72 counties accounted for 6.5% of the nation’s new infections, though they represent only 3.1% of national population.
https://www.bloomberg.com/news/articles/2020-05-15/meat-plant-communities-keep-seeing-virus-spread-at-faster-rates

​China presents view that the world does want to know about origins of novel-coronavirus, but rejects American/Australian blame-China approach.
China insists that the WHO run the investigation, and that it look all over the world, since there have been outbreaks in other countries of related virus, not apparently coming from Wuhan strains.​
"A rational and scientific investigation could focus on three main problems: When exactly did the coronavirus first appear? What is the natural source? And how did the virus pass to humans?" Wang said, pointing out that as mounting scientific evidence suggested COVID-19 may have surfaced earlier than reported in countries beyond China, the investigation should be launched across the world.
https://www.globaltimes.cn/content/1188747.shtml

​57 year old Chinese Ambassador to Israel, who was found dead Sunday morning, is determined to have died of a heart attack. (Remember the Church hearings, where it was revealed that the CIA had a heart-attack-gun? I'm sure they had to get rid of it.)
​https://www.zerohedge.com/geopolitical/china-says-ambassador-died-natural-causes-preliminary-finding-sends-investigators

​Global trade war attack by US on Chinese ability to build 5G mobile devices will have short term success, but it is a one-time play, not repeatable. (At least it delays 5G radiation damage to people for a little longer.)
​  ​Blocking radio frequency devices and other products to Huawei will stop the buildout of 5G in China, and that will not be tolerated. Even switching designs to [the mainland Chinese fabricator] Semiconductor Manufacturing International Corp at 14 nanometers would take a year.”
​  ​“It is both a very serious and volatile situation,” Dr Jones added. “There is a 120-day grace period where hopefully compromises will emerge.”
​  ​China meanwhile is considering its response. From the Chinese side of the board, elementary game theory indicates a maximalist response designed to inflict extreme damage on the already-weakened US economy.
https://asiatimes.com/2020/05/trump-bets-the-farm-on-huawei-equipment-ban/

​ ​U.S. lawmakers and officials are crafting proposals to push American companies to move operations or key suppliers ​ ​out of China that include tax breaks, new rules, and carefully structured subsidies.
https://www.reuters.com/article/us-usa-china-supply-chains/u-s-mulls-paying-companies-tax-breaks-to-pull-supply-chains-from-china-idUSKBN22U0FH

​Stockpiling oil is critical in any kind of war, if you do not produce enough at home.
A Huge Fleet Of 117 Tankers Is Bringing Super Cheap Crude To China

​  ​At present, a total of 117 very large crude carriers (VLCCs) – each capable of shipping 2 million barrels of oil – are traveling to China for unloading at its ports between the middle of May and the middle of August.

​Russia's COVID Game of Elites looks at what has happened in the last 2 months, with regional officials directing regional responses to viral pandemic, sometimes in such a way as to cripple economy, and infect more people, while extending forms of electronic control and surveillance. That went badly. Moscow's mayor did a security check on everybody who was out in early April, causing mass crowds standing in close proximity, awaiting individual evaluations of status and assessing millions of dollars of fines. Cases boomed a week later.​ Putin was in self-quarantine after exposure to a doctor who came down with coronavirus (Did Putin have it?) He is out and completely active again. Traitorous elements in the Russian Federation have shown their unpatriotic hands. The article is long and detailed, and a little hard to read.
https://southfront.org/russias-covid-game-of-elites/

Sweden, with voluntary social distancing, approaches "herd immunity" sooner than other countries. A lot of Swedes take vitamin-D and fish oil supplements... They figure you get the same number of deaths eventually, no matter what.
“I think there is relatively little chance of stopping this whatever measures we take.”
https://www.unz.com/mwhitney/in-the-race-for-immunity-sweden-leads-the-pack/

​Reminder: When the very rich are done with us, they plan to leave us behind
(or worse, but I don't think it will work for them. dead end)​
https://www.nakedcapitalism.com/2020/05/reminder-when-the-very-very-rich-are-done-with-us-they-plan-to-leave-us-behind.html

Hamsters in cages with coronavirus blown onto them by fans have 2/3 reduction in cases of infection if they wear masks.
https://medicalxpress.com/news/2020-05-hamster-masks-coronavirus-scientists.html

Pictured last Saturday in Yoakum standing on new slab by workshop, which is curing under plastic 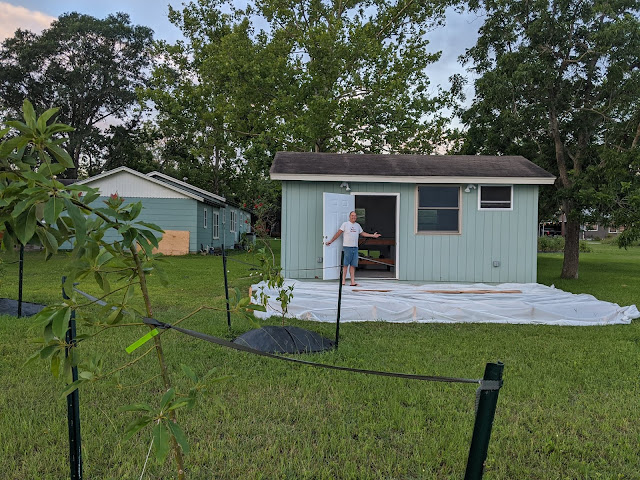