14 year USAF veteran Ashli Babbit's last moments and words. The video with the young man who caught her is not long, 2 minutes.
Listen to his sentiments.
We stormed into the chambers inside, and there was a young lady who rushed to the windows. A number of police and secret service were saying ‘get back, get down, get out of the way’. She didn’t heed the call, and as we raced up to grab people and pull them back, they shot her in the neck, and she fell back on me. She started saying, ‘it’s fine, it’s cool,’ and then she started moving weird, and blood was coming out of her mouth and neck and nose. I don’t know if she’s alive or dead any more… Riot police came in, and started ushering us out with sticks…
https://www.thegatewaypundit.com/2021/01/young-female-trump-supporter-shot-capitol-police-possibly-fatal-warning-graphic-videos/
https://nationalfile.com/breaking-videos-reportedly-show-dc-police-shoot-unarmed-peaceful-female-trump-supporter-in-neck/
This is the video of a handgun shooting 35 year old Ashli in the neck as she tries to jump a barrier then falls onto her back, mortally wounded.
​  ​The circumstances have now become much clearer with video of the shooter emerging overnight. There were police behind her - indicating they did not consider her an immediate lethal threat - at the moment she attempted to breach a barricade inside the capitol building.
​  ​Despite the security officers behind her being potentially in the line of fire, Babbitt was still shot by a Capitol police officer as she attempted to jump over a physical barrier, new video shows.
https://www.zerohedge.com/political/exact-moment-ashli-babbitt-was-shot-while-storming-capitol
​  ​Ashli Babbitt, who had 14 years in the service and did four tours of duty, was married and lived near San Diego, her husband Aaron told KUSI-TV​.
​​The day before she was fatally shot — apparently by Capitol Police, Babbitt tweeted, “Nothing will stop us…. they can try and try and try but the storm is here and it is descending upon DC in less than 24 hours….dark to light.”
https://nypost.com/2021/01/06/protester-killed-in-capitol-was-air-force-vet-from-california/
“Maybe She Was Doing Terrible Things and Deserved to be Shot”  ,​ ​Fox News, CPAC’s Matt Schlapp
https://www.thegatewaypundit.com/2021/01/wow-cpacs-matt-schlapp-suggests-unarmed-16-year-old-trump-supporter-may-deserved-shot-dead-capitol-police-video/
​“It is my considered judgement that my oath to support and defend the Constitution constrains me from claiming unilateral authority to determine which electoral votes should be counted and which should not,” Pence said.
The President ripped into Pence for not having the courage to do what should have been done to protect our country and Constitution.
https://www.thegatewaypundit.com/2021/01/pence-didnt-courage-protect-country-president-trump-tears-mike-pence-patriots-storm-capitol-building/
​This dude was up at the podium in the senate being outrageous.
His image stuck in my mind, maybe yours.
2 protests. same guy.
Viking Protester Is A COINTELPRO Agent Provocateur 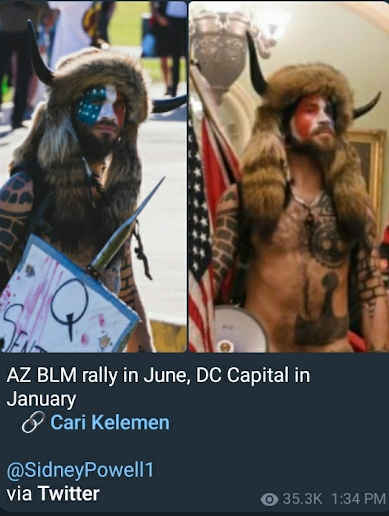 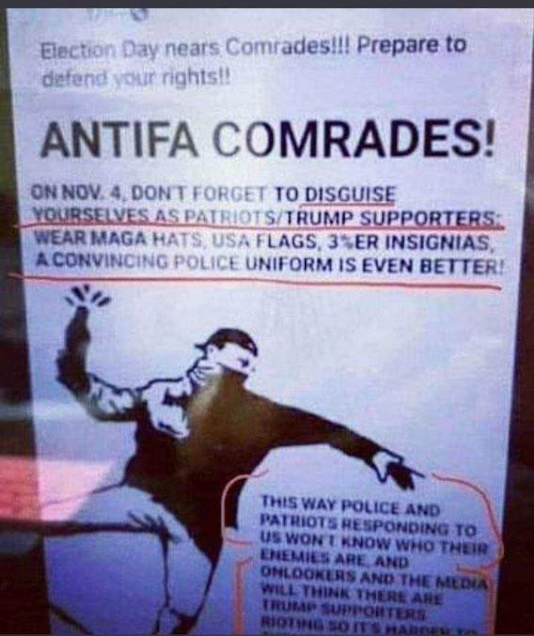 https://rense.com/general96/antifa-flier.php
​Michael Snyder makes the case that protesters were set up to look bad in media presentations.:
Like most Americans, I was absolutely horrified by the violence that I watched at the U.S. Capitol on Wednesday.  But I had a difficult time trying to understand what I was witnessing.  Trump supporters are almost always extremely peaceful, but many of those that were storming the Capitol were being very violent.  That didn’t make sense to me.  And how in the world did protesters get into the U.S. Capitol in the first place?
Well, it turns out that police actually opened up the barricades that were surrounding the U.S. Capitol and purposely allowed protesters to storm the building.  You can see this on video right here…
I have never seen anything like that in my entire life.
And once they were inside the building, they were herded toward particular areas.  For example, you can watch one “guard” actually lead protesters up several flights of stairs right here…
Either the U.S. Congress has the worst security personnel that any of us have ever seen, or this was allowed to happen on purpose.
And there are multiple reports that Antifa activists were brought in by bus.  In fact, one patriot actually recorded video of the Antifa buses that were brought into the heart of Washington D.C. with an escort…
http://themostimportantnews.com/questions-about-the-chaos-at-the-capitol-that-desperately-need-to-be-answered/
​  ​The Nationalist Review reports, “A Black Lives Matter supporter attacked an elderly Trump supporter this evening in Washington, leaving her face bruised and bloody. When other Trump supporters demonstrating for the president’s reelection struggle stepped in to protect the victim and ​  ​request that the police arrest her assailant, the police responded by pepper spraying the entire group.”  ​...
​  “You lost both sides of support. We had your f***ing back, but we ain’t got your back no more!” the marine could be heard shouting at cops.
https://newspunch.com/marine-slams-police-after-they-mace-trump-supporters-we-had-your-fing-back-but-not-anymore/
Biden’s Electoral College victory certified; Trump vows ‘orderly transition’
Dan Scavino, the White House deputy chief of staff, posted a statement from President Trump on Twitter that called for calm.
https://www.foxnews.com/politics/live-updates-pence-has-power-to-block-certification-trump-says
​A recent story:​
President Trump will remain in the White House, according to Gen. Michael Flynn.
​  ​“My big message is that the truth is going to come out and that Donald Trump will continue to be the president of the United States for the next four years,” he said in an interview with Alex Jones.
“There’s no doubt in my mind. When I’m asked on a scale of 1 to 10 – what’s the scale that you would put Trump will be the next president – I say 10, without a doubt.”
​  ​“That is the truth. Everybody in this country, everybody in this world knows that this election on the 3rd of November was a total rip-off,” Flynn added. “It was a fraudulent election, we have had foreign interference from multiple countries that I can rattle off here if you want to get into that.”
​  ​Accordingly, Flynn confirmed previous reports that the election was done under a state of national emergency due to reports of foreign actors penetrating the election system, particularly the Chinese.
​  ​“We have clear evidence of foreign interference, which is [what] the president’s executive order describes, the executive order from 2018,” he continued, referring to Executive Order 13848. “He reinstituted it in 2019 and reinstituted again in 2020, so we are essentially in a national emergency that the president has already declared.”
“He just has to decide whether to execute some of those procedures that are well within his authority.”
​...Trump did not...
https://www.infowars.com/posts/flynn-trump-will-remain-president/
​ ​  America is now divided into two camps.
Today I have posted the view, a quick skim, of the underdog side, the side you do not see in the mass media.
​Who gains by dividing this country against itself? I don't have a pat answer. I don't know exactly what interests are invested where.
It's secret.
It is not in the interests of Americans to be divided this way through manipulation of images and narratives, through lies.​
The lockdowns have hobbled people, isolated them from other humans, so that communications are mostly through media channels, "guided" by artificial intelligence minders.
I certainly have no grand solution.
What I will do today is the same. Blog is up. I cooked dinner last night and breakfast this morning and packed lunches for Jenny, and myself.
I am looking out at the Austin vegetable garden. I will ride my bike to work to provide medical care for people.
​Across the pond, the Queen of England said something which will not be televised:
​  ​In an impromptu, unscripted moment, the Queen said, "One cannot over emphasise just how diabolical these evil doers are. they do not hold the light of God within them," according to BBC production staff.
The Queen warned her subjects that world leaders are secretly pursuing the 'Great Reset' in order to create a "dark new dawn" for humanity.
Senior BBC production staff and palace advisors scrambled to cancel the filming...
https://rense.com/general96/queen-warns.php
​Into the Abyss​
Posted by John Day at 8:43 AM