"Died Suddenly" is the new "Rare" in the world of coronavirus vaccines. Lots of healthy young athletes are just dropping dead lately. Thanks Jeremy.
SURGE OF SPORTS PEOPLE WORLDWIDE SUFFERING UNEXPECTED ILL HEALTH
The list of sudden 'events' amongst the world's most fit and healthy, is extending daily.
https://www.notonthebeeb.co.uk/post/surge-of-sports-people-worldwide-suffering-unexpected-ill-health
The COVID vaccines are the most dangerous vaccines in human history... by a long shot
The smallpox vaccine used to be the most dangerous vaccine in human history. The COVID vaccines are over 800 times more deadly.
https://stevekirsch.substack.com/p/according-to-dr-paul-offit-we-should
Here's the real reason Comirnaty is not available
It's all about liability. It will magically become available when the vaccine for children is fully approved, not before.​  ​
​  ​T​​he reason Comirnaty isn’t available is because those shots would expose the company to liability since the fully-licensed product doesn’t have the liability waiver of the EUA product.
​  ​But once the Pfizer vaccine is fully approved in kids, then Pfizer gets liability waiver on all age groups due to a “feature” in federal law for child vaccines (NCVIA). At that time, they are done. They can market the COVID vaccine products under full approval for all age groups and face no liability when it kills or disables you.
https://stevekirsch.substack.com/p/heres-the-real-reason-comirnaty-is
​Are excess deaths in Scotland this summer and fall due to COVID-19 vaccinations? Why do the rises in excess deaths per age group track the vaccine rollout by age with about a 6 month delay?​
Thanks Doc. Robinson
https://dailysceptic.org/2021/11/04/are-vaccines-driving-excess-deaths-in-scotland-a-professor-of-biology-asks/ 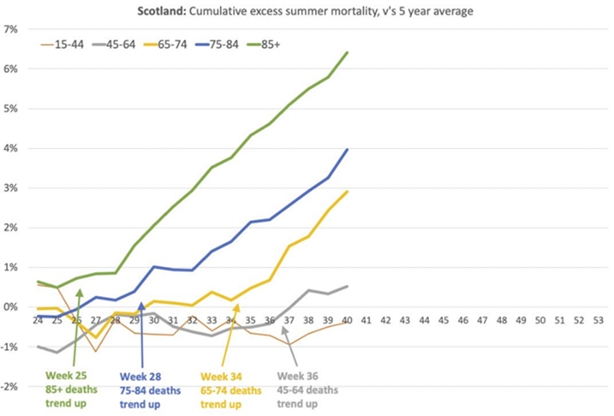