Since my last blog post last week I have been working on physical projects in the world, mostly at the homestead. The absence of a regimented work schedule has allowed me to work on the 1957 house, getting a giant 24 HP vacuum cleaner in Austin, Saturday morning, driving it and a mess of six inch corrugated hose to Yoakum, and troubleshooting the mess all day, as we got shocked by the hose as we sucked out the old insulation. Static electricity was like rubbing wool on a glass rod, but more so with 24 HP providing the rub. The worst piece of hose was the big problem. It's internally-conductive coil of copper wire was exposed by big cracks, allowing the static sparks to jump to human bodies (impressive visuals in the dark attic).
I did not do much of that work in the attic, but enough to "get a feel" for what was happening. None of us wants to do that again.
I told the rental place about the piece of tubing I had tagged with steel wire "really hurting people". They said they would throw it away.
I would never have had any understanding of this somewhat obscure line of endeavor if I had not taken part in the process.
So what? Yeah, "so what"... That's life and learning. That is actually doing things, instead of signing an order. It's different.
For years I have been making scale drawings of houses to build, none of which has been built. I have been studying books about building and remodeling for those same years. I have the books, with highlighted passages, and good illustrations. I have been reviewing them again. I have been drawing pictures again, but this time we are setting out to actually build a modest little house, mainly kitchen and living/dining area, with a combined bathroom and laundry room, and some finished-out attic space. It will attach to the main house via a very short covered walkway. That makes it meet code as an "addition".
The contractor has been doing much of the maintenance on the existing house, and we got to talk and draw this weekend. My friend, Lester, an Architectural Engineer, is being tremendously helpful with advice as to what works to safely and securely construct our ideas.
I am including a drawing of the internal space of the first floor, about 25 ft. X 32 ft. internally, with a 13 X 8 ft. screen porch coming off the back/kitchen door.
This structure will come off the end of the house, which was seen in the background of the last blog post, behind the Mexican avocado trees. Each square represents one square foot of floor space. The sliding glass door looks out to the avocado orchard. (There is a pull-down ladder to the attic, not shown, because I can't upload the scanned image of the updated drawing.)
For now, my abstract ideas are being helped by the much greater experience of the building contractor and the Architectural Engineer, helping us all to proceed carefully and avoid errors. We are communicating well. We all intend to "measure twice; cut once".
Though this has long been a plan of mine, it is made possible by my firing from the clinic for non-compliance with vaccine-mandate, changed to being fired-for-cause at the last minute, after the Governor issued an executive order against vaccine mandates a few weeks ago. I am cashing out my very modest retirement plan, which will fund a large portion of this build.
I have wanted to "build my own house" since I was a boy, or at least a youth. I will be completely satisfied to do some of the work and participate in the design  of "my own house" at this stage of my life.
I will post updates of this constructive learning experience as it proceeds.
You might be entertained some days.
We'll see...
Making Lemonade 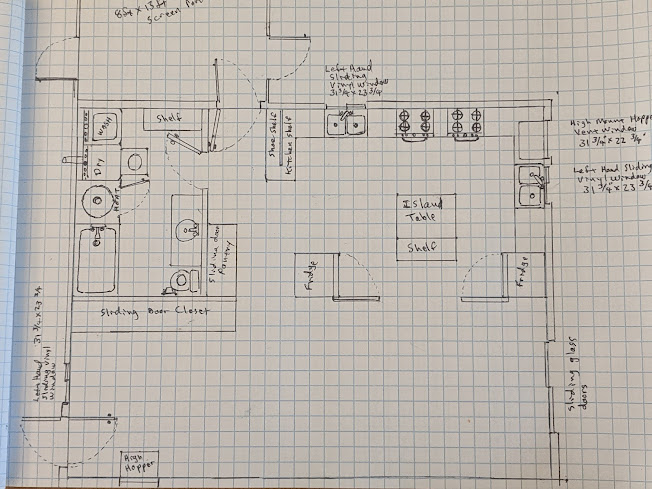