This research article by Spartacus follows upon others that reveal a deep intelligence investment in the technology of SARS-CoV-2, the engineered virus, now with variations, and genetic-engineering "vaccines" to help your body make spike protein itself, for months on end.
This explains a frighteningly plausible big picture of the road to Build Back Better World.
A Hypothetical Mind Control System

Based on the aforementioned technologies, we at ICENI have come up with a concept for what mind control by these methods may look like:

Someone receives a COVID-19 vaccine. This vaccine contains both genetic material coding for SARS-CoV-2 Spike and mind control nanotransducers.

SARS-CoV-2 Spike injures and permeabilizes the blood-brain barrier, allowing the nanotransducers to cross the BBB and enter the brain (this endothelial toxicity also causes a great deal of blood clotting abnormalities in many people).

Nanotech crosses cell membranes and takes up residence in, or alongside, the neurons.

Some of the nanotransducers self-assemble into larger antennae, electrodes, and nanoelectronic components capable of receiving RF in frequency ranges that can deeply penetrate brain tissue.

5G base stations use beamforming and MIMO to focus directed beams of RF into the subjects’ heads.

The RF energizes the nanotransducers by wireless harvested power.

An external encoder/decoder unit begins sending signals to stimulate specific brain regions, with the nanotransducers acting as an interface.

The subject is now under the effects of precision mind control.

​   ​There are many drawbacks with this method. The spatial resolution and fidelity of using RF for this is very low. Two-way communication may be an insurmountable technical hurdle, but one-way stimulation of a specific brain region may be possible. Another drawback is the rather extreme EMF exposure the brain suffers, with far-field RF being beamed directly into it.
​  ​Finer control and two-way communication may be possible with near-field electromagnetic resonance instead of RF harvesting, using something far more intimate and obvious, such as a neurohelmet (like with Battelle’s BrainSTORMS).​..
​  ​Here’s a link to a clip of Dr. Pierre Gilbert, in 1995, stating, quite literally, that the Elites were planning to inject people with mandatory vaccines that would contain nanoparticles that would enter the brain and act as RF receivers.​
​https://tv.gab.com/channel/seejay/view/dr-pierre-gilbert-1995-vaccine-61897df28ac7bef71e09669e​  ...
​  However, BCIs (brain computer interfaces) have a dark underbelly. Their rapid development is being funded and backed by military think tanks and intelligence agencies, with the supposed goal of giving soldiers an edge in combat, allowing them to control drones with their minds and have video feeds piped right into their heads.

​  ​Soldiers with BCIs implanted in their brains could have their sensory perception and emotional regulation altered to view the enemy as monsters, just like that one Black Mirror episode. Or, they could have their emotions deadened completely to make them fine with killing. Such a military is also coup-proof. Any rebellious thoughts are simply deleted from their heads. Their anxieties, erased by stimulation of their pleasure centers. Their fear, their hatred, abolished. Basically, they’re reduced to bio-robots.

​  ​The same technology could also be applied to the citizenry, without our knowledge or consent, neutralizing aggression and self-interested tendencies and rendering us docile and compliant servants of the technocratic New World Order. You, the reader, may view this as highly unethical, and it is. However, it is not illegal. There are no regulations that specifically forbid BCIs from being used to alter people’s affective states, mood, and cognition, thereby turning them into obedient slaves. It is the task of regulators to make autonomy-violating BCIs illegal before they can be used to harm us.​..
​  Consider what the World Economic Forum said, about how people will own nothing and will be happy. What they mean by this is that servitization will replace private property (i.e. renting things on a temporary basis, like driverless Ubers, Lime bikes, and Rug Doctors), and that the remainder of the satisfaction of owning things will be made up of what we at ICENI call techno-psychosocialization; using things like BCIs and drugs to provide a reward stimulus that would have been previously obtained by accomplishing real goals and obtaining real goods through real effort.​..
​  With a wealthy upper caste interested in anti-natalism, Neo-Malthusianism, and “sustainability”, one can be certain that techno-psychosocialization would be used to limit the luxuries of the lower classes and provide an illusory substitute. With a neural lace pumping pleasure into your brain, you could be living in a shanty town built from corrugated aluminum like in Ready Player One and feel like you’re on top of the world. Fried locusts would taste like caviar to you.​..
​  ​Picture if they had the ability not only to make people comfortable with their own genocide, but actually have them walk into a disposal unit with a smile on their faces, all at the touch of a button.
https://iceni.substack.com/p/covid-19-deep-dive-part-iv-mind-control?s=r
Autonomous Human
​(pictured raking dirt) 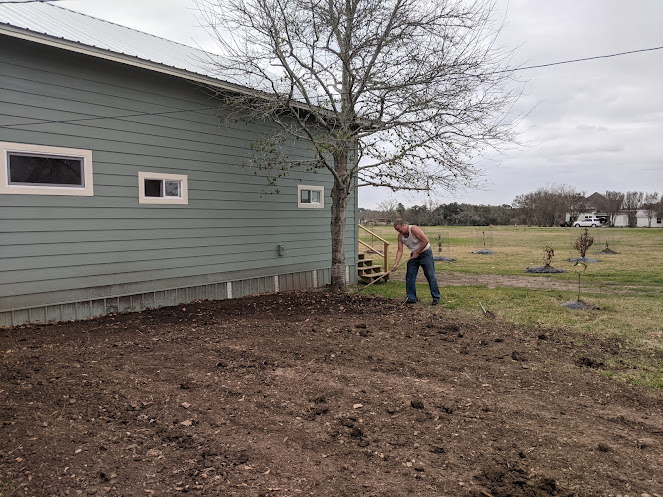