The author of this article downplays the significance of Saudi oil being sold in Chinese Yuan/renminbi.
Importantly, this non-dollar sales arrangement eliminates the foundation of the petro-dollar, which Nixon/Kissinger negotiated with Saudi Arabia after the US default from the Bretton Woods gold standard, after American gold was depleted to the point that it could not honor international demands for gold.
In the past the American military has wrought death and destruction upon nations which have dared to sell oil for other currencies, countries such as Iraq and Libya. Iran has weathered American opprobrium for a long time now, and though under duress, has not capitulated.
Iran is selling a lot of oil to the Chinese, but we don't know the $US value of it.
Saudi Arabia has poor relations with Iran, but can observe which way the wind is now blowing, and has good relations with Russia and China, the new guarantors of military and economic security in the changing "world order".
It is likely that the US will attack Saudi Arabia in some way for this, and China, in some way, but the options are much narrower now. All of the options for attacking Saudi Arabia and China will also degrade US military and-or financial power. The way the "American" decisions have been made recently makes me think that there is a cabal in power which is intentionally working against actual American national interests. It is possibly just hubris and very bad judgement, but it is rapidly degrading American status as a global power,while simultaneously setting up a particularly bad economic status for deeply indebted Americans after the fall of empire. How will America export enough to repay these vast debts when the dollar is no longer accepted at-face-value, but needs to be backed by valuable material exports like oil, wheat, soybeans and cotton? What will Americans eat, burn and wear?
​  ​War and oil is also the focus, along with the US dollar and sanctions, on the back of the headline that Saudi Arabia is in talks with China to sell oil for CNY. Obviously, this is a much larger deal than the $2.6 billion purported India-Russia oil deal floated Monday, and in line with present pace of escalation in this metacrisis. This time we are talking $56 billion in oil and related petro-chemical exports, and $27 billion in Saudi imports...
https://www.zerohedge.com/markets/rabobank-petroyuan-news-suggests-china-preparing-us-sanctions​
​  ​The very conflict on Ukrainian soil also favors this type of measure, as there is a global trend towards multipolarization on several levels, including the economic and financial ones. China stands against the boycotts on Russia and elevates its partnership with Moscow in every way possible, which means that the West may soon also implement coercive measures against Beijing. So, Saudi Arabia takes advantage of the moment in order to enter a possible new market route, with prices in Yuan, serving the interests of China, its partner nations – including the entire BRI – and the BRICS. In this sense, de-dollarization seems just a natural consequence of the process of formation of a polycentric world, as it is being designed with the events in Eastern Europe...
​  ​Obviously, it is possible that Washington will re-establish good ties with Riyadh in the future, but stopping de-dollarization no longer seems an attainable goal.
https://www.globalresearch.ca/beijing-riyadh-cooperation-advances-de-dollarization-process/5774326
Oil Slides Under $100 After Russia Says Given "Written Guarantees" Ukraine Sanctions Won't Impact Iran Nuclear Deal
https://www.zerohedge.com/markets/russia-given-written-guarantees-us-ukraine-sanctions-wont-impact-iran-nuclear-deal
Will the suicidal-empire allow a peace treaty?
​  ​The news out of Ukraine is coming extra fast and furious this morning, and barely minutes after Zelensky ended his videoconference before the US Congress in which he demanded for a no fly zone over Ukraine, the FT reports that Ukraine and Russia "have made significant progress on a tentative 15-point peace plan including a ceasefire and Russian withdrawal if Kyiv declares neutrality and accepts limits on its armed forces."
https://www.zerohedge.com/markets/russia-sparks-ceasefire-hope-after-kremlin-says-neutral-ukraine-army-could-be-compromise
​Treaty disallowed, it appears. No neutrality for Ukraine.
​And just like that stocks puke after just minutes following FT revealing that a "15-point peace plan including a ceasefire" was on the table amid Ukraine-Russia ceasefire talks, Kiev is said to be rejecting the proposal.
https://www.zerohedge.com/markets/russia-sparks-ceasefire-hope-after-kremlin-says-neutral-ukraine-army-could-be-compromise
Eyewitness video accounts of Ukrainian military (including Azov battalion) atrocities and war crimes against civilian Ukrainians, trying to escape in cars, and sheltering in hospital basements.
https://southfront.org/war-in-ukraine-day-20-tipping-processes-amid-absence-of-high-profile-declarations-of-victory/
Donetsk People's Republic militia continue mop-up actions in Mariupol against Ukrainian military and Azov Battalion.
​  ​Local residents help the DPR forces by pointing out locations and firing positions of the Ukrainian Armed Forces.
​  ​Against this backdrop, panic videos from members of nationalist units in Mariupol started pouring into the media space calling on everyone to shout that Mariupol is Ukraine and that the DPR and Russian Federation must urgently stop an attack on Mariupol.
​  ​The members of the nationalist battalions are well aware that they have little chance of surviving if they encounter DNR servicemen from Mariupol and its suburbs or being captured by locals. Their actions in the city have put them in an almost hopeless position.
https://southfront.org/impetus-of-mop-up-in-mariupol-increased-dramatically/
​From The Saker Blog:

​  ​Here is what you need to know about Avdeevka: this is the very heavily defended location from which the Ukronazis could unleash their terror against the civilians in Donetsk.  Now that this entire town has been flattened, the people of Donetsk can now finally hope to live in relative (Ukie Smerch MLRS and Tochka-U missiles can still reach Donetsk!) peace.
​  ​So, not only did Russian encircle the entire Ukrainian forces in an operational cauldron, she then proceeded to cut that single force into two smaller cauldrons (but both still contained in the bigger, operational, cauldron) and now as a show of force, she destroyed the most combat capable Ukrainian unit in the most heavily defended town.
​  ​The “message” here is clear: we strongly encourage you to lay down arms or else…​  ​http://thesaker.is/russian-special-military-operation-in-the-ukraine-day-19/

​China is reducing global supply of manufactured Chinese goods now, due to COVID, which reduces the potential harm of US financial sanctions, since it creates pent-up demand and reduces flows in transit, where payment mechanisms might be impaired by $US sanctions.
​World Economy Braces For Supply Chain Chaos As COVID Closes China
https://www.zerohedge.com/markets/world-economy-braces-supply-chain-chaos-covid-closes-china
Taiwan would have to defend itself from Chinese invasion by sinking all Chinese landing craft before they reach the island. How would that go?
(Could Taiwan buy Russian hypersonic missiles, maybe?)
https://www.zerohedge.com/geopolitical/taiwan-will-defend-differently-ukraine-event-chinese-invasion-expert
US, NATO Rush MANPADS Systems Into Ukraine, Downplay Proliferation Risks
Russia: West 'grossly ignoring' agreements on Manpads
Senior US officials say its a “risk worth taking,” which is easy to say since the risk of proliferation is chiefly in Europe...
https://news.antiwar.com/2022/03/13/us-nato-rush-manpads-into-ukraine-downplay-proliferation-risks/
​Russian News Source Alert: ​
One of Italy’s largest trade unions has called for a protest outside the Pisa airport on Saturday, after receiving a tip from some employees that Ukraine relief flights were transporting weapons and ammunition, not food and medicine.
Several workers at the Galileo Galilei airport refused to load one of the cargo flights advertised as carrying humanitarian aid to Ukraine. The crates did not contain food and medication but weapons, ammunition and explosives instead, the Unione Sindacale di Base (USB) said in a statement on Monday evening...
​  ​The union said the workers refused to load the military supplies as that would lead to the deaths of their colleagues in Ukraine – namely, those working at the bases targeted by Russian missile strikes, where the weapons processed through US and NATO bases in Poland get delivered​
​.https://www.rt.com/russia/552015-italian-flights-ukraine-weapons-aid/
​Russian Central Bank reserves, status explained in detail:
​http://thesaker.is/what-happened-to-russias-gold-and-foreign-currency-reserves-will-there-be-a-default/
​Pepe Escobar (gloating) has the story to expound upon the major rumor:​
​  ​The Russia-led Eurasian Economic Union and China just agreed to design the mechanism for an independent financial and monetary system that would bypass dollar transactions
​  ​On Friday, after a videoconference meeting, the Eurasian Economic Union (EAEU) and China agreed to design the mechanism for an independent international monetary and financial system. The EAEU consists of Russia, Kazakhstan, Kyrgyzstan, Belarus and Armenia, is establishing free trade deals with other Eurasian nations, and is progressively interconnecting with the Chinese Belt and Road Initiative (BRI).​..
​  The Eurasian system will be based on “a new international currency,” most probably with the yuan as reference, calculated as an index of the national currencies of the participating countries, as well as commodity prices. The first draft will be already discussed by the end of the month...
​..​NATO nations amount to at best 15 percent of the world’s population. Russia won’t be forced to practice autarky because it does not need to: most of the world – as we’ve seen represented in the hefty non-sanctioning nation list – is ready to do business with Moscow.
​  ​Iran has shown how to do it. Persian Gulf traders confirmed to The Cradle that Iran is selling no less than 3 million barrels of oil a day even now, with no signed JCPOA (Joint Comprehensive Plan of Action agreement, currently under negotiation in Vienna). Oil is relabeled, smuggled, and transferred from tankers in the dead of night.
​  ​Another example: the Indian Oil Corporation (IOC), a huge refiner, just bought 3 million barrels of Russian Urals from trader Vitol for delivery in May. There are no sanctions on Russian oil – at least not yet.​..
..Russia and Iran are about to sign a very important agreement, which may likely be an equivalent of the Iran-China strategic partnership. The three main nodes of Eurasia integration are perfecting their interaction on the go, and sooner rather than later, may be utilizing a new, independent monetary and financial system.​..
​  ​Meanwhile, there’s a mystery to be solved: where is that frozen Russian gold?
http://thesaker.is/say-hello-to-russian-gold-and-chinese-petroyuan/
Gold, the "new dollar"?
So Many Russians Are Buying Gold That Central Bank Halts Bank Purchases
https://www.zerohedge.com/commodities/so-many-russians-are-buying-gold-central-bank-halts-bank-purchases
​Russia sanctions Hunter Biden, "the big guy" and top US officials. This is symbolic unless they have holdings in Russian banks, or Russia somehow gets control of the Ukrainian banking system (nightmare scenario!).​
https://www.zerohedge.com/military/here-are-all-latest-news-and-developments-ukraine-war-march-15
How much gas will your paycheck buy, and how does that affect your economic perceptions and choices? How might you vote in November?
​  ​Our estimate for March is that the average wage of production and nonsupervisory workers, as measured by the BLS’ Average Hourly Earnings (AHE), can purchase 6.4 gallons, which is up from the low of 4.4 gallons in July 2008, and significantly lower than the high of 13.8 gallons in February 1999.
https://www.zerohedge.com/political/political-implications-plunging-gas-affordability
​Judged by the enemies she keeps?
Tulsi Gabbard Smeared as ‘Treasonous Liar’ By Sen. Mitt Romney Over Ukraine Biolab Concerns
https://news.antiwar.com/2022/03/14/tulsi-gabbard-smeared-as-treasonous-liar-by-sen-mitt-romney-over-ukraine-biolab-concerns/
"Millennial age group, 25 to 44 experienced an 84% increase in excess mortality"
"It’s the worst-ever excess mortality, I think, in history." Can you guess what caused it? I think I know...
​.. ​OK, so what caused all the deaths?
The only explanation is the vaccine because the deaths are so massive.
https://stevekirsch.substack.com/p/ed-dowd-millennial-age-group-25-to?s=r
​Call it what you want...
​  The latest official figures from the UK Health Security Agency show that triple vaccinated people aged 30-70 have now lost at least 70% of their immune system capability compared to the natural immune system of unvaccinated people.
​  ​Their immune systems are deteriorating between 10 and 30% per week on average, with the detioration much larger and quicker among the younger age groups.
​  ​If this continues at the current rate then all triple vaccinated 18 to 39-year-olds will have 100% immune system degradation by the middle of April 2022, with all other triple vaccinated age-groups following suit not long after.
​  ​In other words, official UK Government data strongly suggests the triple vaccinated population are rapidly developing acquired immunodeficiency syndrome.
https://dailyexpose.uk/2022/03/13/gov-report-proves-triple-vaccinated-have-ade/
Immunocompetent
(pictured varnishing more cabinet plywood for walls) 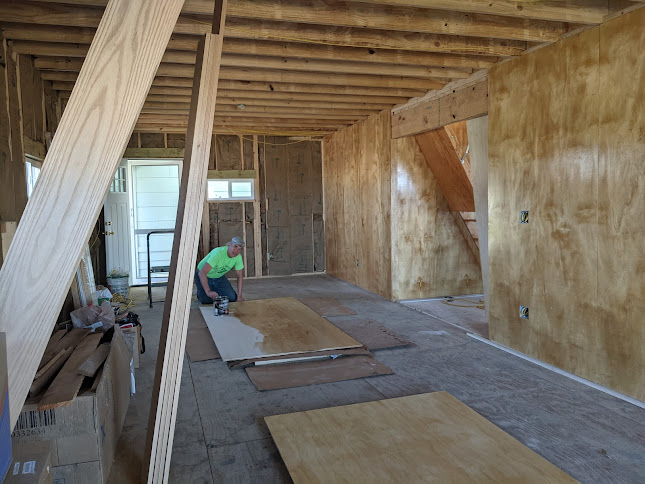