As Time Goes By

PRION DISEASE: Watch this space, folks. mRNA vaccines cause your cells to become spike-protein-making-Energizer-Bunnies, for at least 6 months. mRNA is typically gone after 30 minutes of work, but they needed this stuff to work longer, so they modified it to resist degradation in the cell. Who knew how long it would stay active? No time to do the full test, until Robert Malone MDs group reported in July 2021 that 6:6 people they tested for spike protein in the bloodstream, 6 months after Pfizer/Moderna jabs, still had circulating spike protein…It build​s​ up in “Amyloid deposits”, like giant fat islands in a London sewer.These may be Prion-Globs, as it now appears.
Before the “vaccines” were released theoretical concern​s​ w​ere​ voiced that some of those sequences corresponded to prion-sequences. It could be a problem later…

​  ​Is this what Luc Montagnier meant when he predicted the jabbed with spike-protein-making “vaccines” would be “dead in 2 years”? Did he leave some better notes?
I followed a patient with Creutzfeldt Jacob Disease down the tubes as a senior medical student. It took almost a month to make the diagnosis. Weirdest disease I ever saw. Brain biopsy told the story.
https://www.thegatewaypundit.com/2022/06/two-new-studies-show-link-incurable-degenerative-brain-disease-experimental-covid-19-vaccine/
https://www.researchgate.net/publication/358661859_Towards_the_emergence_of_a_new_form_of_the_neurodegenerative_Creutzfeldt-Jakob_disease_Twenty_six_cases_of_CJD_declared_a_few_days_after_a_COVID-19_vaccine_Jab
​  ​Will 2/3 of westerners die this way? All my kids?
I’m just asking. ​I'll wait patiently.

​ "Joe Biden" will reduce the import tariffs​ on Chinese solar panels, but is also invoking the Defense Production Act to induce US manufacturing of solar cells to resume. It costs more here, 30% more, or so. It is a strategic industrial capability. It looks like American manufacturing can't compete without government help these days.
https://www.zerohedge.com/markets/biden-invokes-defense-production-act-accelerate-solar-fuel-cells-latest-flailing-attempt
​  ​Solar cell manufacture in the US​ c​an work economically​ if labor costs are much lower. Losing reserve currency status can do that. ​Reducing effective labor cost was why socialized-medicine, socialized safety-net, social-security and things like that were devised​ in industrial nations​, according to Michael Hudson​.​  ​Taking the parasites off of the social-utilities ​facilitate​s​ export competitiveness.​ The Federal Government might not be the best manager of these utility functions, though...​
​  ​A not-secret, told to me by a NASA friend is that patents on the triple-layered PV cells expired. They have been licensed for “only in space”, but now they can go on your roof. They are much more efficient, and a little more expensive to make. Wouldn’t it be nice to make them in the USA?
It’s a “strategic industry”. There is no way to avoid a command-economy as America re-industrializes.
Financier-planned-economy fed the parasites and killed the living flesh. We’ll have to get back to that one later, right?
​  ​Farmers on combines growing 5000 acres of wheat are the most productive ​American ​laborers, but they are all bankrupt, losing the farms to Bill Gates, who will have drones farm it for him. The US lost Kissinger’s food-as-weapon dominance and now needs to sanction food-exporting Russia.
Sanctions work great when you have the global reserve currency, and can also make it disappear POOF! when it belongs to bad-guy Putin, or bad-guy Xi, or bad-guy Bin-Salman…
Sanctions don’t work when you don’t print the global reserve currency. Venezuela can’t sanction anybody, or even ​retrieve​ their own gold​ from London​.
​  Keep watching Sri Lanka. Sri Lanka has had working relations with Russia since the mid 1950s, and abstained from the UN vote against the Russian invasion of Ukraine. Russian oil will now flow to bankrupt Sri Lanka. Who is footing the bill? China? This is a premier opportunity for Russia and China to rescue a starving country with a new alternative to the $US and IMF debt-slavery. China might even pay off Sri Lankan debt, and transfer it to a new Eurasian-World-Bank if such a thing comes into being soon. China has all of those US T-bills to invest better, until they go POOF! Russia used to.​
https://www.zerohedge.com/markets/cash-strapped-sri-lanka-looks-russia-quench-thirst-oil
​  ​There was a coup/assassination attempt by Turkish military officers against "Sultan" Erdogan in 2016
https://www.theguardian.com/world/2017/oct/04/turkish-court-finds-soldiers-guilty-erdogan-coup-assassination-plot .
​  ​All the best rumors are that the US/CIA were behind this, and that Russia informed Erdogan at the last minute, saving his living-ass and foiling the coup. It was clear to Erdogan which way the ill-wind was blowing. Turkey is a "NATO member" now. Erdogan knows which parties are "agreement capable". He's a shameless opportunist, but he's NOT STUPID.
​  ​I presume there is Byzantine diplomacy between Erdogan and Putin. They are going to cooperatively de-mine the black sea for wheat-transport ships.
Playing nicely...​   Turkey Calls On Ukraine To Cooperate With Russian 'Grain Corridor' Plan To Unblock Ports
https://www.zerohedge.com/geopolitical/turkey-calls-ukraine-cooperate-russian-grain-corridor-plan-unblock-ports
​"Mostly Peaceful":  Armed Man Arrested Outside Brett Kavanaugh's House; Planned To Kill Supreme Court Justice
​https://www.zerohedge.com/political/armed-man-arrested-outside-brett-kavanaughs-house-planned-kill-supreme-court-justice
​
​  ​EU politicians are rational-actors , guided by bribes and threats from the western deep-state-swamp and its owner-financiers.
Their real job is to deliver the people willingly to the orders of Their-Masters.
It's getting hard to deliver people "willingly" to these schemes, ​current plans are​ not "winterized" without Russian natural gas.
​I'm pretty sure that's what Kissinger has been saying. "The West" has to negotiate now or lose access to strategically-necessary Russian energy and exports.​
He said it to the press, then he said it at Davos. Kissinger is a messenger for Rockefeller interests.
American "Gas crisis" is "Policy"  (Corn Ethanol in gas, degrades engine life, raises prices of gas and corn and reduces corn supply for food.) Tom Luongo
​  ​A couple of months ago there was a little announcement that the Biden administration would raise the cap on ethanol blending into gasoline stocks beyond the 10% limit in order to alleviate the ‘gas shortage.’
​  ​On the surface that idea made a kind of simplistic sense, along with the releases from the Strategic Petroleum Reserve, if we were no longer going to buy crude oil from the Russians.
​  ​But, there’s only one problem with that, namely there isn’t enough ethanol to blend into the gas. Oh, and that SPR release? It all went to Europe while prices rose here.
​  ​Moreover, that same fuel needed to produce nitrogen fertilizer which is needed to produce the corn is part of the same supply shortage that we’re supposedly trying to help overcome.
https://www.zerohedge.com/political/bidens-food-and-fuel-crisis-its-policy-stupid

S​urvey results (Russian friendly website Alert)  ​ ​Most Americans Accept “Ukrainian Defeat”: Opinion Poll
One of the largest American think tanks, Democracy Institute, recently carried out an opinion poll on some topics concerning the Ukrainian issue...
[The Democracy Institute is a think tank based in Washington, DC and London. It was founded in 2006. According to the University of Bath's Tobacco Tactics project the institute has taken part in pro-tobacco activities and has previously received funding from the tobacco industry.]

​  ​The data shows how Americans are tired of seeing their government involved in a conflict whose results will not bring any improvement to the people. Only 36% of the respondents said they supported Biden’s policy in Ukraine, while 53% said they were against it.
​  ​The numbers concerning other questions asked to the respondents corroborate the Democratic President’s unpopularity. For example, 45% said they would be fine if the US “allowed” the Ukrainian defeat, stopping sending military aid and letting the conflict end with the inevitable Russian victory. In the same vein, 50% of respondents were against the billion-dollar aid packages for Ukraine, and only 5% claimed to see Kiev as a priority for the US.
​(Wait, how did this question get into that survey?)
Furthermore, 16% of respondents claimed that they would like to see Russian President Vladimir Putin as the leader of the US.   ​  ​https://www.globalresearch.ca/most-americans-accept-ukrainian-defeat/5782676

​Here is a Ukraine War update (excerpted) from the Russian Minister of Defense:
​  ​As for today, 97% of the territory of the Lugansk People’s Republic has been liberated.
​  ​Residential areas of Severodonetsk have been fully liberated. The takeover of its industrial zone and neighbouring settlements continues. The offensive in the Popasnaya direction is developing.
​  ​51 units of foreign military equipment have been destroyed during the last 10 days of the special military operation.
​  ​In five days, 126 servicemen of the Armed Forces of Ukraine surrendered, their total number is 6,489 people.
​  ​In Mariupol, water and electricity supply to residential areas is being restored in stages, streets are being cleared and the first social facilities have started to function.
​  ​The Azovstal plant, including its underground facilities, has been completely cleared of mines.
​  ​Berdyansk sea port has started to operate. On behalf of the Supreme Commander-in-Chief they are ready to load grain at these ports.
​  ​The largest nuclear power plant in Europe, Zaporozhye, which can generate up to half of all nuclear power generation capacity of Ukraine, is operating normally.
​  ​33 coal mines, 2 oil fields and 14 gas fields taken over by Lugansk and Donetsk people’s republics during the special military operation continue to operate normally. The liberated territories are home to 57% of Ukraine’s steelmaking capacity.
https://thesaker.is/teleconference-national-centre-for-state-defence-control-chaired-by-general-of-the-army-sergei-shoigu/
Julian Assange's wife Stella Moris reveals how they raise children together while he is in jail waiting an extradition decision
​  ​When Julian is taken from his cell to the prison yard he tilts his head up so his eyes can focus on the distance. If he narrows his eyes, the double razor wire above becomes a blur. Beyond is the open sky.
​  ​Julian recently discovered a family of nesting magpies. He spotted their home subversively nestled between the razor wire. I think our family is like those magpies.
​  ​When we are together, we are always a few metres from their nest. Our children — Gabriel, who is five, and Max, three — only have memories of their father within the brutal surroundings of Belmarsh prison.
​  ​We don't know how long our children have left with their father. We don't know if we can visit him or even talk to him on the phone. If the extradition goes ahead, US authorities retain the right to put Julian in conditions so cruel that no one in his position is likely to survive.
​  ​It is impossible for Julian and me to escape a feeling that he is on death row. Our weekly visits may be the only time we have left together.​..
​..​Were it not for our children, this approaching catastrophe would be all-consuming. But Julian and I know these may be the only memories that our children will have of their father. We make our visits as joyous as possible.
​  ​I don’t need to explain to Gabriel and Max the reality of this place where we go to visit their father. They live it. The children walk under razor wire and past layers and layers of security to reach their daddy.​..​
​..​During visits, our family is allowed to embrace at the beginning and end. We can hold each others’ hands across the table.
Julian and I are not allowed to kiss. But Julian would rather kiss his wife and be penalised than have that taken away from him too. So, we kiss.​ (Prison rebellion​ ;-}
https://www.abc.net.au/news/2022-06-08/stella-moris-my-life-with-julian-assange-extradition/101132624
S​till a Kiss​
(pictured with tomatoes before and after extended canning session last night) 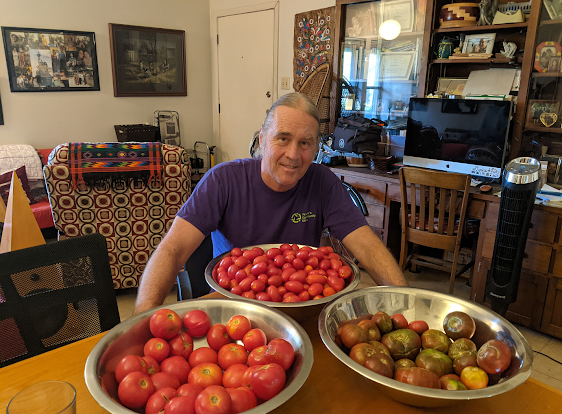 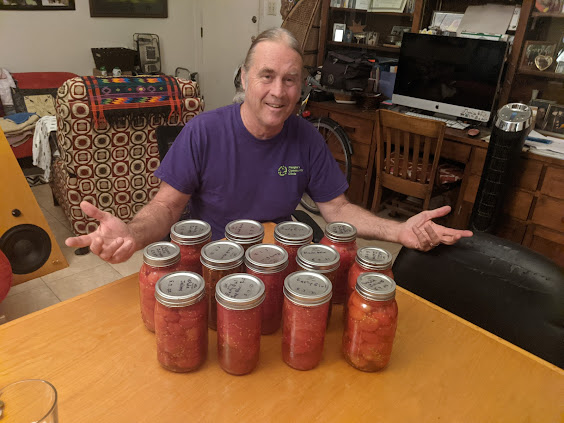