For 71 years, the state of Israel has been killing Palestinians to keep them off the lands that their families have farmed for thousands of years. Those who have the original Right of Return, recognized by the UN, are mostly dead from Israely bullets or age. Of course the latest opening of the US embassy in Jerusalem gave an opportunity for Israeli snipers and drones to kill and wound thousands more, for approaching a fence in the desert.
https://www.rt.com/news/426617-gaza-protests-embassy-jerusalem/

Caitlin Johnstone has "Fifteen thoughts about Israel":
We don’t live in a world where the lines between nations mean anything to those with real power; in reality “Israel” and “America” are both purely conceptual constructs which only exist to the extent that people believe in them. There is no actual “Israel” which can exert control over an actual “America”, and vice versa. It isn’t nations and governments pulling the strings of real power in the world, it’s a class of plutocrats who aren’t ultimately answerable to any government.
https://medium.com/@caityjohnstone/fifteen-thoughts-about-israel-cd047979ea92 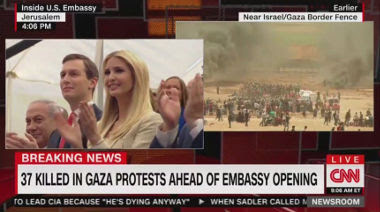 The Deep State in the US is In Control, Not the President, Bashar al Assad, Syrian President. Thanks Eleni.
https://www.sott.net/article/385197-Assad-The-Deep-State-in-the-US-is-in-control-not-the-president

Moscow is attempting to calm the atmosphere in the Middle East. It is therefore opposed to an attack on Israël by Iran, just as it was opposed to an Israëli operation against Iran in 2008.  This has very good background on Russian strategic objectives, going back to Catherine the Great. Thanks Eleni.
http://www.voltairenet.org/article201027.html

Putin acknowledged this week that since oil trades in dollars, “we are thinking of what needs to be done to free ourselves from that burden.”
Every world leader understands this, Putin’s just unique since he’s willing to come out and say it. It’s not just Russia though. People across the world have had just about enough of U.S. bullying and recognize USD dominance in the global financial system represents the key obstacle to overcome if they wish to avoid being pushed around forever.
https://libertyblitzkrieg.com/2018/05/14/europe-may-fold-but-china-and-russia-see-opportunity/#comment-120204

How the US weaponized the global financial system (and now what?)
Just as political decentralization is the best way to achieve true self-determination, financial decentralization is the best way for nations to protect their own sovereign interests.Of course to really do so requires resetting the global monetary order.  So long as the dollar enjoys its privileged position established by Bretton-Woods, the rest of the world is vulnerable to the US leveraging that against them. https://mises.org/wire/iran-sanctions-reminder-how-america-militarized-financial-system-1

John Bolton sabotaged the last nuclear deal with North Korea quite successfully. He is in the ideal position, and working vigorously to do that again.
The Under Secretary of State for Arms Control was -up to 2005- one John Bolton. He had hired the hawkish "experts" and continued to influence the department after he had moved to the American Enterprise Institute. The intrusive inspection issue is said to have been his idea.
http://www.moonofalabama.org/2018/05/john-bolton-once-sabotaged-a-deal-with-north-korea-he-will-try-to-repeat-that.html

Venezuela has elections 5/2018. Bolivian President Evo Morales warns that the US, and puppets-on-strings, the Organization of American States, will militarily invade Venezuela to prevent the exercise of the will of the voters. (The stage is clearly set. Preliminary economic war is completely operational.)
https://www.telesurtv.net/english/news/Bolivian-President-Evo-Morales-Warns-of-Plan-to-Invade-Venezuela-by-US-OAS-20180513-0008.html?

Google employees sign petition, and some resign in protest against creating software to help drones track and kill people faster and better.

The Murder of Martin Luther King, how the myths were created and maintained for 50 years (Top level orders from LBJ and J. Edgar Hoover, unlimited deep state budget, and who took the paychecks, and what they did, Parts 1 & 2. Not particularly long reads, either.) Thanks, Eleni.
https://www.lewrockwell.com/2018/04/phillip-f-nelson/the-murder-of-martin-luther-king-jr-how-the-myths-were-created-and-sustained-for-fifty-years/
https://www.lewrockwell.com/2018/05/phillip-f-nelson/the-murder-of-martin-luther-king-jr-part-2-how-the-myths-were-created-and-sustained-for-fifty-years/

For Economic Truth, Turn to Michael Hudson, explains Paul Craig Roberts. (Randy just lent me his book, Killing the Host. I include his articles regularly. Search for them in email or at the blog, or online. All excellent.)
https://www.paulcraigroberts.org/2018/05/09/economic-truth-turn-michael-hudson/

Means and Motives
Posted by John Day at 10:01 AM