Workers of the World,

Andrew Dobbs lays out the layers of reality in Nationalist and Socialist movements in America. The real Socialists were Occupy. they got hammered right away. What is being offered by our owners is relative position within society, with the boundaries defined by the owner class, and the poor people cut out of everything. Middle managers and up can play some role, for now...
These sorts of mistakes will keep popping up as long as these “socialists” refuse to actually pursue a socialist line. We need clear truth on this too. Socialism is the demand that production be brought under the control of the working class, seizing the value chain as a whole. Simply demanding that capitalists give workers more isn’t socialism, and it will — again — confuse that primary question of all politics: who are our enemies, and who are our friends?

Senator Elizabeth Warren demands in writing that the Pentagon explain it's role in the bombings of civilians in Yemen. The military is caught lying. It has been running the show for the Saudis all along. "No we don't know what they do with what we sell them."
https://theintercept.com/2018/08/14/elizabeth-warren-yemen-bombing-us-military/
China has reduced the ability for speculative gambling on the Yuan/Renminbi. This stabilized both the fall in the Yuan, and has led to a fairly level field of combat for the Yuan+gold vs $US. The Yuan+Gold seems to be the challenger to what has become the currency of global bullying and looting. Which would you want to borrow in , next time around? Again, today would be a good day to hedge your currency exposure with gold, a long term decision.
https://www.zerohedge.com/news/2018-08-16/china-crushes-yuan-bears-cost-short-yuan-soars-most-2016
https://goldprice.org/gold-price-china.html
http://www.kitco.com/charts/livegold.html

America The Punitive (how to lose friends and influence people against you)
https://www.strategic-culture.org/news/2018/08/16/america-the-punitive.html

Pepe Escobar: The long-awaited deal on the legal status of the Caspian Sea signed on Sunday in the Kazakh port of Aktau is a defining moment in the ongoing, massive drive towards Eurasia integration.  Up to the early 19th century, the quintessentially Eurasian body of water – a connectivity corridor between Asia and Europe over a wealth of oil and gas – was exclusive Persian property. Imperial Russia then took over the northern margin. After the break up of the USSR, the Caspian ended up being shared by five states; Russia, Iran, Azerbaijan, Turkmenistan and Kazakhstan.
http://www.atimes.com/article/all-hands-on-deck-the-caspian-sails-towards-eurasia-integration/

There is glyphosate/RoundUp in kid's foods. The Germans found it in their beer last year. It causes cancer. We all eat it.
http://www.shtfplan.com/headline-news/weed-killing-carcinogen-glyphosate-found-in-childrens-foods_08152018

Jadav Payen planted a tree every day since 1979 on a sandbar/island in India. He's a regular guy who hated to see the snakes baking to death in the sun. It's forest now. He's still going. Thanks Jeff.
https://www.lonelyplanet.com/news/2018/08/14/man-planted-forest-india/

Jenny with okra and black-eyed peas this morning at dawn 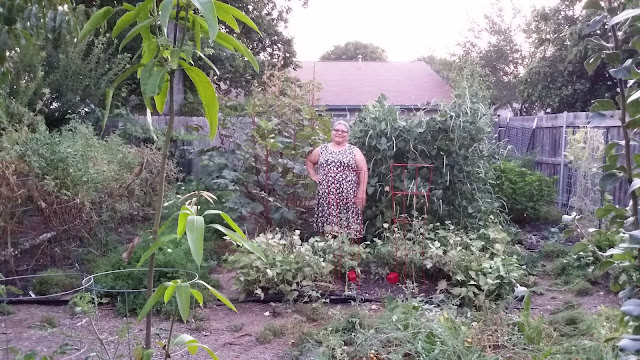