Forgive the format of this news flash. It looks tacky. Thanks anyway, Tom.
The WHO, what may remain of it, is sort of disavowing a second coronavirus wave.
This will fill out their portfolio of sequentially taking every side of a controversial issue in such a way as to be consistently worse than a coin toss.
They say they can't talk about it, but hint that it's the nice sunny weather that will prevent a second wave.
(As we now know, it will continue to be nice and sunny forever. It's the new normal. The days will never again shorten.)
Vitamin-D, from sunlight on skin, is very important for normal function of the immune system.
There has been very good correlation between lower vitamin-D levels in hospitalized patients, and worse disease.
Very few hospitalized patients have been found to have normal vitamin-D levels.
Those were low normal, not mid normal, and they fared the best.
(Do take 5000 units of vitamin-D per day, won't you?)
https://www.fort-russ.com/2020/05/major-who-makes-about-face-and-rules-out-second-corona-wave-breaks-with-bill-gates-predictive-model/
My Fellow Transnational Elites, we are going to need another crisis to tide us through the long summer of discontent.
Let's have race riots!
Everybody has been cooped up for months, feeling really restless and insecure, and the weather is great.
All we need is the right spark, and enough encouragement.
Then we can institute martial law, the next logical step, since self-quarantine is starting to fail.
We can maintain order as our global economy goes through the biggest reset since the Great-Depression/WW-2.
Did you make sure the bricks got sent to the protest sites, and the agents-provocateur got paid?
https://www.zerohedge.com/political/its-setup-mysteriously-staged-bricks-appear-throughout-major-protest-cities

Trump did not (yet) invoke The Insurrection Act. His voice sounded tired and deeply troubled during his address.
​  ​President Trump announced from the White House Rose Garden Monday evening that he planned to mobilize "all available federal resources, civilian and military" to put an end to violent protests across the country, while blaming the outbursts on "professional anarchists, looters, criminals, antifa" whom he described as "domestic terrorists" bringing widespread harm to the nation.
​  ​As expected following remarks from Press Sec McEnany earlier, President Trump insisted during a brief speech that he would send in military personnel to quell violence and looting if governors failed to act. He also insisted that his administration was committed to justice for Floyd and his family, and that Trump's administration is "an ally" of peaceful protesters.
​  ​"I am dispatching thousands and thousands of heavily armed soldiers,” Trump said Monday at the White House, clearly seeking to reassure terrified business owners and members of the community in areas hard-hit by the coronavirus and the riots that he would uphold his duty to maintain order.

​20 unanswered questions about the George Floyd Protests (​could be more refined, but at least it's asking)
https://off-guardian.org/2020/05/31/the-george-floyd-protests-20-unanswered-questions/

It looks like the Congressional Budget Office is saying that it will take a full decade for the US economy to rejoin the track they were predicting in January, which is to say "never"...
Comparing its interim, May 2020 projections to the last official forecast made in January 2020, the CBO said that the level of nominal GDP in the second quarter of 2020 would be $790 billion (or 14.2%) lower than the agency had previously forecast in January 2020 (a number which unfortunately will only grow larger with time especially if the Atlanta Fed's 52% GDP drop forecast is accurate). Subsequently, the difference between those projections of nominal GDP narrows from $533 billion (9.4% lower in the latest projection) ) by the end of 2020 to $181 billion (2.2 percent lower) by 2030.
https://www.zerohedge.com/economics/budget-office-finds-us-economy-wont-return-normal-until-2030

Here is a Libertarian (Ayn Rand type) view, with stuff I like and don't like. It's that kind of a day:
​  ​At the same time, there is much more going on here than police abuse of power. Floyd became such a powerful symbol for people of all races and classes. He could have been any one of us. The boot on the neck smacks of Orwell’s chilling prediction of life under government plans: “If you want a vision of the future, imagine a boot stamping on a human face – forever.”
​  ​Americans of all classes, races, and political affiliations refuse to acquiesce to that future. Enough is enough.
The fires that burn in our cities today were born long ago with government impositions in every aspect of our lives. The impositions date back many generations. In the course of three months, the lockdowns stacked the wood; Floyd’s murder was the match.

​America is Drowning in Problems, Paul Craig Roberts
​  ​It is as difficult to understand the liberal and progressive belief in government as it is to understand the libertarian belief in the efficacy of the invisible hand that allegedly causes private greed to serve the public’s interest.  Humans are a built-in failure machine.  Their time perspective is short term.  They are always surprised by the unintended consequences of their own thoughtless actions and inactions.
​  ​Throughout America, state, local, and federal government  epitomize  failure. Trillions of dollars have been poured into weapons systems that cannot be used without destroying the United States along with the rest of the world, while dams fail, bridges collapse, communities deteriorate, and homelessness grows. The government in Washington spends time, effort, and money manufacturing enemies to justify the budget of the military/security complex, while  jobs and the US economy are offshored, the environment is degraded, and health care needs go unaddressed.   The US rivals third world countries in terms of the percentage of its population that has no savings, no access to health care, and no prospects for advancement in life.
https://ahtribune.com/us/americas-collapse/4182-drowning-in-problems.html

​Italian doctor says the coronavirus is losing potency, that it's not the same as what they were fighting in March and April.​
​  ​“In reality, the virus clinically no longer exists in Italy,” said Alberto Zangrillo, the head of the San Raffaele Hospital in Milan in the northern region of Lombardy, which has borne the brunt of Italy’s coronavirus contagion.
​  ​“The swabs that were performed over the last 10 days showed a viral load in quantitative terms that was absolutely infinitesimal compared to the ones carried out a month or two months ago,” he told RAI television.
https://www.reuters.com/article/us-health-coronavirus-italy-virus/new-coronavirus-losing-potency-top-italian-doctor-says-idUSKBN2370OQ

Russia is rolling out favipiravir, which was the first drug approved for treatment of novel-coronavirus, back in mid February  by China. Favipiravir has long been in regular use in Japan against another RNA virus, Influenza. RNA is made up of replicating chains of 4 nucleosides. Favipiravir and remdesivir both act by impersonating a nucleoside, getting incorporated into viral RNA chains, but then blocking further chain replication. That stops the virus.
Favipiravir is a pill, not an IV infusion. It can be taken early, the point at which blocking viral replication works best. The high viral loads are never reached. Early testing and treating needs to be possible.
This medicine was tested by the FDA in the USA in 2015, but never marketed here.
https://www.reuters.com/article/us-health-coronavirus-russia-exclusive/exclusive-russia-after-approving-japanese-covid-19-drug-to-roll-out-game-changer-next-week-idUSKBN2381FR

​  ​Iranian tankers were 2200 km from the US coast when the Iranian-flagged “Fortune”, followed by “Forest”, entered Venezuelan waters, challenging the US embargo and the US’s threats. The Islamic Republic was broadcasting loud and clear a strong message.
​  ​The first message was dispatched to the US administration after Gulf and Arab Leaders conveyed a direct message to the Iranian leaders: “Washington is determined to stop the Iranian tankers sailing to Venezuela”. Iran responded to all messages received that “its five tankers will sail to Venezuela and if any of these tankers is intercepted, Iran will respond in the Straits of Hormuz, the Gulf of Oman or anywhere else it sees fit.”
​  ​“These five tankers – the Clavel, Fortune, Petunia, Forest and Faxul- are only the beginning of the supply to Venezuela. Iran has the right to send any of its tankers anywhere in the world and any US interception will be considered an act of piracy and will trigger a direct response,” said an Iranian decision-maker who revealed the Iranian response to the US administration via message-carriers.
​  ​“Iran had decided to avoid the horn of Africa because the plan was for the first tanker to reach the Venezuelan waters on the first day of Eid el-Fitr. The aim was to share an important day of the Islamic Republic’s defiance to the US in its backyard and to break the sanctions imposed on one of Iran’s main allies. It is a message for the “Axis of the Resistance” that Iran will not abandon its friends and allies anywhere in the world whatever the challenges. It is directly confronting the US by imposing a new rule of engagement”, said the source.

​  ​Iran shut its ears to all threatening messages from the US menace and instructed its five tankers to go not round the horn of Africa but through the Gulf of Aden via Bab al-Mandab strait, the Suez Canal and Gibraltar into the Atlantic Ocean- where the US has a strong presence and influence. This shortens the distance and it tested the intentions of the American Navy. Simultaneously, Iran informed its allies of its readiness to confront the US if ever an escalation should loom on the horizon so that these allies within the “Axis of the Resistance” are ready for a wider confrontation if needed.
​  ​The first Iranian tanker, “Fortune”, reached the Caribbean Sea on the first day of Eid al-Fitr, on Sunday 24th of May, with US Navy ships in the vicinity. The tankers are carrying over 10 million barrels of oil but also Alkylate and spare parts to start repairing any of the eight “out of order” refineries, to enable oil-rich Venezuela to be self-sufficient in the future. The US sanctions on Venezuela had paralyzed Venezuelan refineries and caused gasoline shortages, with the aim of overthrowing the legitimately elected President, Nicolas Maduro.

(blogger pictured pointing at the biggest melon, which ended up being not quite ripe, but we ate it anyway) 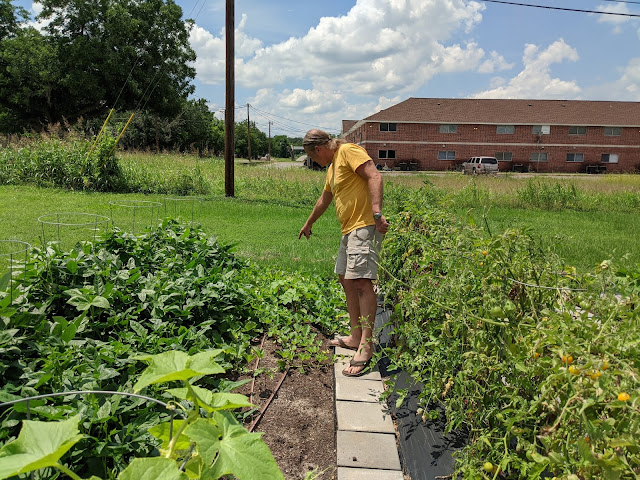