If we are conquered and ruled when we are divided, might we be able to have some freedom in a unity born of cooperation and negotiation?
What are the relative costs of a negotiated cooperation compared to a subservient division under autocracy?
"Freedom isn't free", of course, but what might be the costs to us?
How would we begin the process of negotiating a cooperative society?
Is it possible to revive social structures described in our laws as actually functioning entities?
Can they function at current scales, or would social groups need to be vastly smaller?
Are there any gross disparities feeding the owners at the expense of citizens, which might be ended to free up resources for a cooperative social project?
The "exorbitant privilege" of creation of currency, devolved to banks, private banks, but the system of fractional reserve lending, is the major support for the system of elite control which we now "enjoy". Not corrupt enough in it's very essence, it has had to become more corrupt through layering and leveraging of debts to keep flows of wealth open to the elite class, even as actual wealth has dried up throughout the "real economy".
As the real economy involutes with the shove of coronavirus wave #1, there are competing-elite scrambles to take control of the physical levers of power, the military and police, as well as controlling food, fuel, water, electricity and information flows. The battles are mainly on Facebook, Twitter, radio and TV so far.
I propose Public Banking in the public interest in this coming reset, but I got it from Ellen Brown.
Here is Ellen Brown explaining banking-in -the-public-interest last November, before we were aware of the current crisis (which arguably began in September). "Green New Deal" was trending then.
https://vimeo.com/383100274
The Bank of North Dakota has helped keep the wealth local, rather than being extracted by globalists. Whoever first uses created money gains the most benefit. Whoever gets the interest from created money will inevitably own everything, if the system does not reset. We are entering another reset. It's important to stimulate local economies this time, not extract wealth and life from communities. If the interest goes to the public, to the local commons, supporting schools and infrastructure, then economy can thrive, rather than be bled dry by parasitism.
We would not need a whole lot of cooperation to make the move to public banking, with profits going to local and state governments. Reducing bonded debt on cities, counties and states would benefit their economic health and reduce their tax rates.

Back to the divisions that keep us controlled, today featuring Antifa agitators and the expected blowback. Thanks Eleni.
​  ​Antifa and its institutional allies are encouraging the aforementioned crime wave and urban terrorism in order to provoke a lethal response from the security services that could then increase the likelihood of a “race war” breaking out so as to destabilize the US government. The envisioned end game is to replace the country’s current capitalist system with an economic leftist one, even if the social fascists and many of their allies aren’t aware of it.

​A National Guard Reservist describes his 12 days on the streets of Seattle, what was happening. This is important.
​  When I came home, I was exhausted, angry, and saddened by what I had experienced. I said I needed to share what happened, but I also said I needed some time to rest and reflect. My unit was activated for 12 days. We worked long hours but we continued to stay dedicated to the state and the mission. I can’t stop that now. I’ve been up all night, trying my best to put into words what I experienced and observed.
https://www.theorganicprepper.com/truth-seattle-riot/

Torching Wendy's at night for race-war. Who did it?  ($10,000 to you, if you know and can tell police.)
​ ​"Look at the white girl trying to set s*** on fire...look at that white girl trying to burn down a Wendy's," the anonymous camera man can be heard saying.
"This wasn't us," he added, referring to BLM. "This wasn't us!".
​  ​As the fire grew, fears mounted that it could ignite a neighboring gas station, but by midnight the fire had burned out without spreading further.

​View of American riots from France, Thanks Eleni:​ (Who is funding Antifa and other agitators? Who profits? How?)
​  ​Anti-racism protests in the United States have rapidly evolved into a promotion of the ideas championed by the Democratic Party. It was no longer a question of fighting for equality in law for all or challenging the prejudices of certain police officers, but of reopening a cultural conflict at the risk of a new Civil War.​..​
​  ​Let us go back to the history of the United States to see where the sides are. Populist President Andrew Jackson (1829-1837) vetoed the Federal Reserve Bank (Fed) established by Alexander Hamilton, one of the fathers of the Constitution, who favoured federalism because he was violently opposed to democracy. Just as Jackson’s disciple, Donald Trump, is today in opposition to the Fed.
​  ​Twenty years after Jackson, came the "Civil War" to which today’s protesters all refer. According to them, it pitted a slave South against a humanist North. The movement that began with a racist news item (the lynching of black George Flyod by a white policeman from Minneapolis) continues today with the destruction of statues of southern generals, including Robert Lee. Actions of this type had already taken place in 2017 [4], but this time they are gaining momentum and governors from the Democratic Party are participating.
​  ​However, this narrative does not correspond at all to reality: at the beginning of the Civil War, both sides were slavers, and at the end, both sides were anti-slavers. The end of slavery owes nothing to the abolitionists and everything to the need for both sides to enlist new soldiers.​  ​The Civil War pitted a rich, Catholic, agricultural South against a Protestant, industrial North aspiring to make a fortune. It crystallized around the issue of customs duties which the South believed should be set by the federal states, but which the North intended to abolish between the federal states and have the federal government determine.
​  ​Therefore, in debunking the Southern symbols, the current demonstrators are not attacking the remnants of slavery, but denouncing the Southern vision of the Union. It was particularly unfair to attack General Lee, who had put an end to the Civil War by refusing to pursue it with guerrilla warfare from the mountains and by choosing national unity. In any case, these degradations effectively pave the way for a fourth Anglo-Saxon civil war.
​  ​Today the notions of South and North no longer correspond to geographical realities: it would rather be Dallas against New York and Los Angeles.

​Veterans Today​ claims to have intel that Donald Trump had a stroke, or maybe Parkinson's disease.
(Yeah, maybe he drank too damned much Diet Coke, too.)
They claim that he lost it, and has been compartmentalized within his own administration.
(I have to discount this as politically motivated, since they assert elsewhere that Joe Biden is not senile, because he can jog a block in a video.)
Unsteadiness descending a long ramp and using left hand to steady right hand and water glass could be from various neurological disorders, which we all don't want.
https://www.veteranstoday.com/2020/06/14/intel-drop-trumps-presidency-such-as-it-was-ended-some-weeks-ago-then-things-got-worse-much-worse/

Neil Howe: "Our system is near the breaking point"
​ ​"Institutions are not in control, political leaders are not in control, and remember one essential dynamic that I talk about in The Fourth Turning was how senior generations of leaders having had no experience of crisis, no experience of building and maintaining authority and strong institutions, are going to be completely at sea...
...and eventually what you need is an end-run by an entirely new group, or new movement to take control and be energized by a young generation moving in... and I see that happening early in this decade."
https://www.zerohedge.com/economics/neil-4th-turning-howe-our-system-near-breaking-point

The real economic catastrophe hasn't hit yet. Just wait for August (when all those short term measures end and all those debts are suddenly due, and unpayable, and it all has to be dealt with.)
https://www.buzzfeednews.com/article/tomgara/economy-recession-coronavirus

We can pay for Medicare for All by eliminating private health insurance. Sure, but it's also going to destroy a massive middle class compliance-jobs program. Who will employ those workers? I'm not saying it's a bad idea. I agree with it, but huge displacements are destabilizing, and this country is politically unstable, already. Let's have a good plan.
https://justthenews.com/government/congress/nader-we-can-pay-medicare-all-without-raising-taxes-eliminating-private

About 10 years late the European Court of Human Rights declares that French people DO have the right to bo​y​cott Israel for illegal, genocidal policies against Palestinian people in their native (​illegally-​occupie​d-by-Israel​) land.
The European Court of Human Rights (ECHR) has ruled that France violated the rights of 11 pro-Palestinian activists when it convicted them for campaigning against Israeli goods, and has ordered the government to pay damages.
https://www.rt.com/news/491569-echr-france-bds-activists-compensation/?utm_source=Newsletter&utm_medium=Email&utm_campaign=Email

​This is eminently reasonable, and gives up a lot that has long been agreed by the UN.
Palestine says to declare statehood on 1967 borders if Israel annexes West Bank lands
http://www.china.org.cn/world/Off_the_Wire/2020-06/10/content_76144704.htm

Proper analysis of widespread mask use reveals flaws in arguments against it. Public masking is cheap, helps dramatically reduce viral spread, and gives great bang-for-the-buck in public health.
I like this point: ignoring the Non-Aggression Principle by pseudolibertarians (masks are also to protect others from you; it’s a multiplicative process: every person you infect will infect others).
https://medium.com/incerto/the-masks-masquerade-7de897b517b7

(pictured with Mrs. Non-aggressor at Yoakum vegetable and avocado estate) 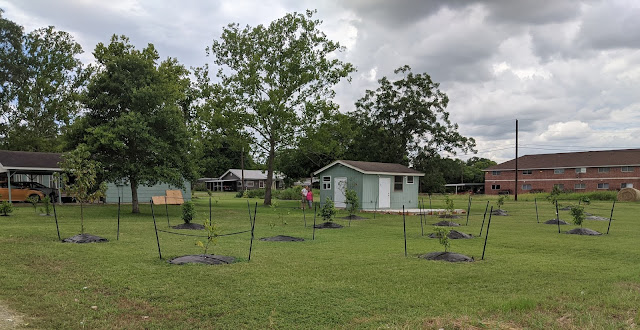