An Arrested Middle East, the New Strategy for Securing the Realm, Disrupted, Alastair Crooke, Thanks Eleni
A sovereignty-ist Russia may not be as drawn to this cosmopolitan vision as China, but really it has little choice. Because, as President Putin repeatedly points out, the dollar constitutes the toxic problem plaguing the world trading system. And in this, Russia cannot stand aloof. The dollar is the problem for the Middle East too, with its noxious corollaries of oil, currency, trade and sanctions wars. The region will not long be able to sit on the fence, keeping distant from this struggle for the global financial order.
The Middle East, as deference to the U.S. illusion of power wanes, has as little choice as has Russia: It will be pushed to view the U.S. as its past, and to ‘Look East’ for its future.
And Israel will cease to be the pivot around which the Middle East revolves.

I am grateful to Eleni for this very good John Helmer article about what is going on with Libya between all of the global power brokers and surrogate death pawns they pay and equip.
IN LIBYA, TURKEY HASN’T WON YET; RUSSIA HASN’T LOST YET; THE US AND ITS PROTECTORATE OF GREECE, CYPRUS AND ISRAEL ARE LOSING EVERYTHING

Yes, that knee-on-the-neck thing is an Israeli move, practiced daily on the rightful citizens of the land they stole, and whom they hold as prisoners and punching bags. Thanks Eleni.
Israeli forces trained Minneapolis cops in brutal 'restraint techniques' at US conference
At least 100 Minnesota police officers attended a 2012 conference hosted by Israel's Chicago consulate, the second time such an event had been held. There, they learned the violent techniques used by Israeli forces as they terrorize the occupied Palestinian territories under the guise of security operations. The so-called counterterrorism training conference in Minneapolis was jointly hosted by the FBI...
https://www.sott.net/article/435748-Israeli-forces-trained-Minneapolis-cops-in-brutal-restraint-techniques-at-US-conference 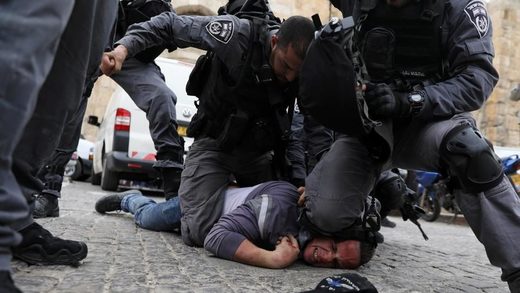 On "Coincidence Theory" vs. "Conspiracy Theory":
(Coronavirus infections are real, not "bullshit". Take 5000 IU vitamin-D daily,)
Seriously… how could these long-desired objectives of The Establishment NOT be the result of conspiracy?  Because, just like clockwork, as Coronavirus was shown to be bullshit… the channel was changed once again – this time, to cities on fire.  So, whether by deception or never letting a crisis go to waste, the George Floyd drama has now assumed center stage; at least until the COVID-19 Show® returns next season.
https://www.theburningplatform.com/2020/06/05/coincidence-theorists-see-all-donut-and-no-holes-in-the-coronation-of-the-cult/

Martin Gugino rushed up to 2 officers in an advancing line, holding his cellphone close to their electronics to capture their signatures, and was modestly pushed in the middle of his chest, taking 3 long steps backward, and falling off-camera, where he lay holding his head off the ground, and gently holding his smartphone in his right hand. Right away, in seconds, as he lies in a self controlled position, something dark starts coming out of his right ear. This is mighty fast and it's pouring. That would have to mean an artery was severed in the base of his skull, and rapidly popped through his eardrum or the flesh lining his ear canal.
The basilar skull fracture that could have caused that might be caused by something like a sledgehammer swung at the spot under and behind his right ear. There is no apparent injury to the right base of his skull, and the extreme kyphosis of this upper back makes him hold his head off the flat pavement as he lies there, in control of his body. These parts do not fit together. He was reportedly alert, cogent and oriented at Erie County Medical Center, where he was admitted. His lawyer asked for "privacy".  No details of his actual injuries have been released at all.
https://www.youtube.com/watch?v=necSGKiwbEE

Just make the two cops take the fall for following their orders, training and procedures when there is bad press.
There are so many glaring  examples of police brutality, but this is not one.
Suspended without pay or lawyers.
The officers we spoke with said the Buffalo Police Benevolent Association’s statement asserting all 57 officers resigned from ERT in a "show of support” with the two officers that were suspended without pay is not true.
“I don’t understand why the union said it’s a thing of solidarity. I think it sends the wrong message that ‘we’re backing our own’ and that’s not the case,” said one officer with whom we spoke.
“We quit because our union said [they] aren’t legally backing us anymore. So why would we stand on a line for the City with no legal backing if something [were to] happen? Has nothing to do with us supporting,” said another.
A representative from the (turncoat) Buffalo Police Benevolent Association (falsly) told 7 Eyewitness News Reporter Hannah Buehler the officers resigned in “disgust” with how the two officers were treated.
https://www.wkbw.com/news/local-news/exclusive-two-buffalo-police-ert-members-say-resignation-was-not-in-solidarity-with-suspended-officers

If you live in Texas, as I do, you might be interested in this interactive COVID map of cases by county. Austin, San Antonio and El Paso are all doing fairly well. Most cases are in Houston and Dallas/Ft. Worth areas. Thanks Ilargi.
https://apps.texastribune.org/features/2020/texas-coronavirus-cases-map/

Don't be in a bar or a church with a superspreader:
In the latest study on superspreaders, epidemiologists in Hong Kong analyzed over 1,000 coronavirus cases between January 23 and April 28, and found that just 20 percent of cases were responsible for 80 percent of total transmissions, data which could impact policy around the world.
About 350 of the cases were community transmissions, while the rest were imported cases. More than 50 percent of the community transmission cases were traced back to just six superspreader events, all of which involved indoor social gatherings that lasted several hours.
“Superspreading events are happening more than we expected, more than what could be explained by chance. The frequency of superspreading is beyond what we could have imagined,” Ben Cowling, one of the study’s co-authors said.
The study also found that 70 percent of infected people did not pass the virus to anyone else, further highlighting the need for a highly targeted response to defeating the pandemic.
https://www.rt.com/russia/official-word/490868-majority-coronavirus-infected-dont-spread/

This may be (paid-for) wishful thinking, but if it is true, that COVID is just spreading within a susceptible 50-80% of the population, we should know by this fall.
Don't count on it. Take 5000 units per day of vitamin-D.
Prof. Karl Friston: ‘80% Not Even Susceptible to COVID-19’

​Type O blood is a bit of an advantage against catching coronavirus. Not as much as a normal vitamin-D level, I'll wager.​
The research found that individuals with type O blood are between 9% and 18% less likely than individuals with other blood types to have tested positive for the virus. However, there was little difference in susceptibility among other blood types, the study found. When the researchers adjusted the data to account for factors like age and pre-existing illnesses, as well as when it restricted the data to only those with high-probability of exposure like health-care workers, the findings were the same.
https://www.zerohedge.com/health/researchers-uncover-which-blood-type-most-resistant-covid-19-and-another-malaria-link

​That excellent jobs report Friday was at least 3% high on employment.  BLS admits that.
​https://www.thestreet.com/mishtalk/economics/surprise-the-bls-admits-another-phony-jobs-report

​Here is another unorthodox move the Federal Reserve could make to dial-in inflation, which is presented as a goal.
After decades of covertly suppressing the dollar price of gold, the Fed could start buying physical gold, which would cause weakening of the $US against gold, in a controlled fashion. (It could be a transition to a return of the global gold-standard, also.)
It's just hypothetical, of course, but it is a swell bubble, just waiting to be blown, and lots of billionaires are holding physical gold somewhere by now.
​https://www.zerohedge.com/markets/break-glass-guggenheims-minerd-warns-fed-may-start-buying-gold-support-dollar-hegemony
​Rumplestiltskin ​
​ ​
Posted by John Day at 5:20 PM