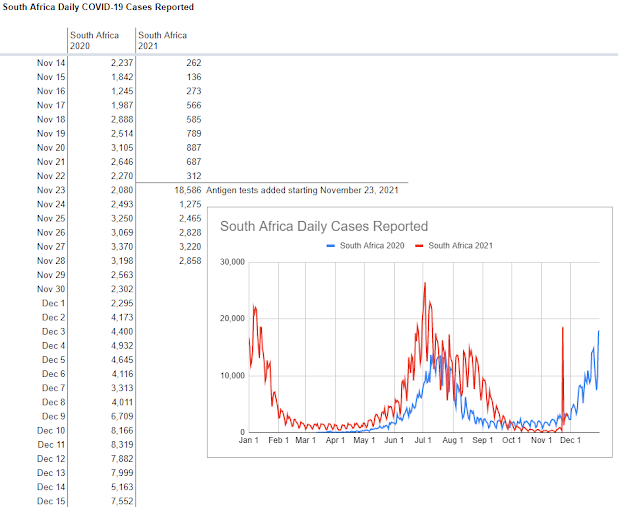 so, there’s the mystery of the incredible spread rate solved. it’s a data splice. never, ever trust a trend change that takes place at a data splice. it’s 99%+ likely to be a data artifact. this certainly appears to be.​..
​  omicron is already everywhere...
​  ​next up is vaccine evasion. the answer here is “maybe” though frankly, so were the last ones. in the UK data, the vaccinated were getting much higher case rates than the unvaccinated. so this is hardly new.​..​
​  ​but, unlike past variants, the vaccine companies are now leading the charge on “the vaccines will not work on omicron.” this is a 180 flip from past variant claims.
this represents an interesting pivot. i suspect it is self serving. the data is simply becoming too clear that the vaccines do not stop spread and instead make it worse.​..unless omi is going to lead to worse outcomes than “double the risk of contracting covid” it’s hard to see what the fuss is about, and if that IS the claim, then it’s awfully hard to see why “take more vaxx” is the answer.​..
​  ​so, now we are to believe that because this variant is vaccine evading, the solution is to take twice as much of a vaccine already known to have the worst side effect profile of any vax ever approved for US use and that this variant has already evaded?
https://boriquagato.substack.com/p/the-omicron-absurdities-continue
​This comment that the Omicron B.1.1.529 had 30 mutations in the spike protein alone caught my eye. "Unstable", indeed.
The mutation rate of this virus is one mutation per week or two. That's 30 to 60 weeks for this one gene alone.
It has been elsewhere observed that this strain seems to be rather isolated as a lineage.
All of this would be easy in a lab though, if one wanted to release this specific virus for some reason...​
“Right now there are reasons to think that the Omicron variant could be less pathogenic,” he went on, meaning less able to cause harmful infection.
​  ​Explaining the science behind the hypothesis, Altshtein said that “we already see Omicron has many mutations, more than Delta. More than thirty in a single gene of its spike protein. This is too many, and it means the virus has an unstable genome. As a rule, this sort of infectious agent becomes less dangerous, because evolutionarily, an overwhelming number of mutations leads to a weakening of the virus’s ability to cause disease.”
https://www.rt.com/russia/541735-omicron-variant-covid19-pandemic/
​From 8/27/21​: SARS-CoV-2 mutation rate.
The virus that causes COVID-19 mutates almost once a week—significantly higher than the rate estimated previously—according to a new study by scientists from the Universities of Bath and Edinburgh.
SARS-CoV-2, the virus that causes COVID-19, was previously thought to mutate about once every two weeks.
https://phys.org/news/2021-08-mutation-covid-virus-percent-higher.html
Two Israeli doctors test positive for Omicron COVID variant
Both doctors were fully vaccinated with three shots of the Pfizer coronavirus vaccine.
​(One doctor just got in from London, testing negative before his flight, but positive a few days later when he felt sick, after transmitting it to the other doctor, and probably some other people, too.​)
​https://www.jpost.com/health-and-wellness/coronavirus/two-israeli-doctors-test-positive-for-omicron-covid-variant-687412
Federal judge blocks Biden vaccine mandate for health care workers nationwide
The judge said 'indefinite states of emergency' pose 'grave risks' to civil liberties
https://www.foxnews.com/us/federal-judge-blocks-biden-vaccine-mandate-for-health-care-workers-nationwide

​...​A careful reading of Jacobson shows that it is not just an automatic consideration allowing the government to do what it wants when a pandemic emergency has been officially declared. In a pandemic, courts look to Jacobson for precedent as an apparent direct fit, but even so must evaluate the evidence for satisfying all of the Jacobson criteria. As we have shown, Covid-19 vaccine mandates do not satisfy any of the required criteria in Jacobson, let alone all of them.
​  ​The question to be addressed then is why a pandemic infection with approximately 1/20th the natural mortality risk of the previous smallpox pandemic would be subject to the grievous penalties of loss of employment, loss of medical care, loss of necessary activities of daily life, and mandate of vaccines that unlike in the previous pandemic have no long-term safety data. Given that none of the Jacobson criteria have been met, the infringements and demands of the government and its public health agencies have not been justified according to law. This is the argument that must be made as to why the proposed vaccine mandate is an unwarranted overreach inconsistent with established public health policy and law.
https://brownstone.org/articles/covid-19-vaccine-mandates-fail-the-jacobson-test/
Federal Judge Rejects DOD Claim That Pfizer EUA and Comirnaty Vaccines Are ‘Interchangeable’
A federal district court judge rejected a claim by the U.S. Department of Defense that the Pfizer-BioNTech COVID-19 vaccine being administered under Emergency Use Authorization is interchangeable with Pfizer’s fully licensed Comirnaty vaccine
https://childrenshealthdefense.org/defender/judge-allen-winsor-pfizer-eua-comirnaty-vaccines-interchangeable/
​The birthplace of Democracy, Crippling fines...
Greece Mandates Vaccines for Adults Over 60 with Calls for Compulsory Vaccinations Echoing Across Europe
https://www.zerohedge.com/news/2021-11-30/greece-mandates-vaccines-adults-over-60-calls-compulsory-vaccinations-echoing
​People are leaving the formal economy.  It is not working for them. Wages were barely enough before, and now are not enough to get back in the yoke.
"A Secular Shift": What The Black Death Tells Us About The Labor Market
​  ​As Deutsche Bank strategist Robin Winkler writes, there are many reasons as to why people might be unable to respond to rising wages, such as obstacles to returning to work. Another possible explanation is that people are looking through the ‘money illusion’: they understand that wages are barely rising in real terms.
https://www.zerohedge.com/markets/secular-shift-what-black-death-tells-us-about-labor-market
​"Smart Cities" will further constrain and control people, like smartphone data. ​They are antithetical to complex life.
...The idea of smart cities is born of what Watson describes as “the same human superiority-complex that thinks nature should be controlled”. What’s missing is symbiosis. “Life on Earth is based upon symbiosis,” Watson says. She suggests we replace the saying “survival of the fittest” with “survival of the most symbiotic”. Not as catchy, perhaps. But smarter.
https://www.theguardian.com/cities/2020/jan/15/the-case-for-making-low-tech-dumb-cities-instead-of-smart-ones
​We've already heard that there is nowhere near enough lithium on planet earth, and that rare-earth elements are also way too rare to supply what is planned.
​  Woodmac gets straight to the point: “delivering the base metals to meet [net zero 2050] pathways strains project delivery beyond breaking point from people and plant to financing and permitting.”
Copper, which Woodmac emphasizes “sits at the nexus of the energy transition” stands out particularly.
The 19 million tonnes of additional copper that need to be delivered for net-zero 2050 implies a new La Escondida must be discovered and enter production every year for the next 20 years.
Even if you focus on just one of the obstacles bringing new copper supply online  – the time it takes to build a new mine – and leave aside all other factors, net-zero 2050 has zero chance.
https://www.mining.com/cop26-will-be-a-colossal-mining-cop-out/
Multipolar World items: (These could both be portrayed as "defensive weapons-systems". There are also new nuclear weapon delivery systems.)
​  ​Speaking to gathered experts, Putin called the development of high-speed missiles as a “necessary” response to “Western actions.”
“We have already successfully conducted tests, and from the beginning of the year we will have in service a sea-based hypersonic missile of Mach 9,” Putin said.
​  ​Although he didn’t name the weapon, the president is most likely talking about Zircon, the world's first hypersonic cruise missile capable of continuous aerodynamic flight while maneuvering in the atmosphere using the thrust of its own engine.
​  ​Earlier this month, Putin revealed, following successful testing, the missiles would be supplied to the Navy from 2022.
https://www.rt.com/russia/541743-moscow-unveil-new-supersonic-weapon/
​It should be named "Near Earth Orbit Warrior"​
RUSSIA'S new weapon dubbed "Star Warrior" has the West worried as it can blast satellites out of orbit at heights of up to 500 miles above Earth.
Vladimir Putin's state owned TV issued a chilling threat that Russia may deploy the system to destroy some 32 Western satellites to render Nato missiles useless.
...the satellite strike was a deliberate warning to the West not to cross the Kremlin’s red lines on Ukraine.​..in the event of worsening relations, Russia could wipe out 32 GPS satellites crucial for Nato’s military operations, including the pinpointing of missile strikes.
​https://www.the-sun.com/news/4126730/putin-star-warrior-missile-russia-nato/
​Underclass Warrior​ 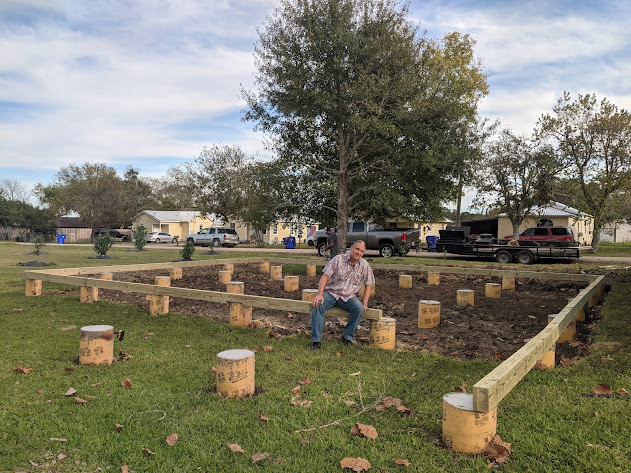