Brexit vote wins by 3.8% margin, 48.1% to 51.9%, with 72% of voters turning out. That's almost everybody.
It was not equally distributed. London, Scotland and Northern Ireland want to stay in the EU. Most other regions want out, back to a nation-state.

46% of Leave voters polled before the vote figured that it would be rigged for Remain (What happened?)  http://www.politics.co.uk/news/2016/06/21/half-of-leave-voters-believe-eu-referendum-will-be-rigged

This article from the day before the vote interviews political scientists, who say that empires (EU is modeled as an empire) go through periodic crises, either dividing, being overtaken by an outside force, or sometimes reorganizing to settle class differences, as FDR did in the US. Class warfare, with richer-rich and poorer-poor is the stress that breaks empires apart, but it needs a spark...
http://www.wired.com/2016/06/science-brexit-european-unions-reckoning/

Here is a conservative Leave position from just before the vote, Ambrose Evans Pritchard, probably the most respected British financial writer. He said, "the world won't end" and "we need national sovereignty". Also he said, "Don't blow it".  http://www.telegraph.co.uk/business/2016/06/22/uk-and-europe-face-mutual-assured-destruction-if-they-botch-brex/

Brandon Smith at Alt-Market called the signs right, predicted that Brexit would serve the central bankers and TOP financial elites fine, and that George Soros had bet heavily against markets and bought a lot of gold, while he was saying how bad Brexit would be if it happened. (BINGO!) Thanks Eleni  http://alt-market.com/articles/2932-brexit-vote-passes-heres-how-alt-market-called-it-when-no-one-else-did

Larry Summers, a consumate American political/financial insider laid out the cascade of consequences he foresaw for global and regional financial markets if Brexit passed, very detailed. Who "follows" Summers, a lot of middling rich do, the Fed's-got-your-back-BTFD crowd. They are in a panic. They are the big losers of bubble-profits this time, and Monday is predicted to be the big losing day.  http://larrysummers.com/2016/06/21/6895/

Donald Trump was strategically located at his Scottish Resort grand reopening to congratulate Britons on their "people's choice" for national independence, and to say that Americans can make the same choice, that it's something like the feeling sweeping across the peoples of the world... He's taking an anti-globalist stance, even though he is a global capitalist. https://www.theguardian.com/us-news/live/2016/jun/24/donald-trump-brexit-referendum-clinton-sanders

Yves Smith at Naked Capitalism looks at "Brexit, The Crisis Begins". This is largely a crisis for global finance, since London has been one of the major financial centers, probably the biggest financial center in the EU. That's a lot of bankers stabbing each other in the back for clients and assets.
It's also open season on banks for bank runs. Current EU policy is to screw all bank customers like Cypriot bank patrons got screwed. All the losses get taken by the savers/suckers. Wanna' get your money out now?
The whole financial reset will take at least 2 years to negotiate between the UK, and whatever remains of the EU.
It sure looks like nationalism and trade/currency wars are about to mainline some methamphetamine.  http://www.nakedcapitalism.com/2016/06/brexit-the-crisis-begins.html

"In Britain, there now seems to be a unique opportunity to organize a movement like (Unidos) Podemos in Spain, the European Union’s next big headache coming up in a few days. Podemos is proof that this can be done fast, and there’s a big gaping hole to fill." Ilargi @ The Automatic Earth   http://www.theautomaticearth.com/2016/06/brexit-the-system-cannot-hold/ 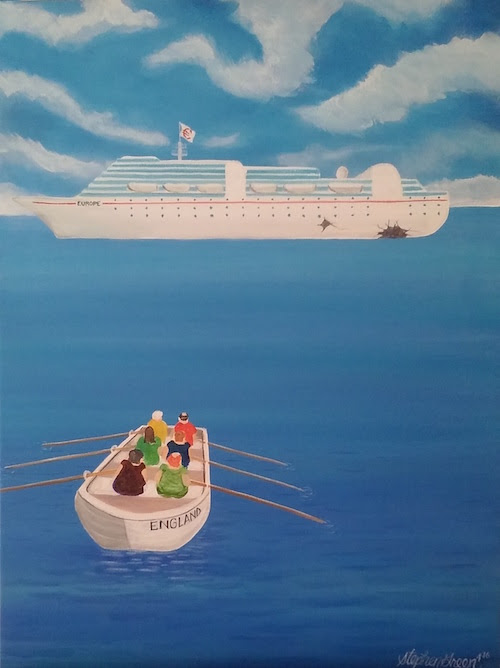