Sun Yat Sen was one of the great historical figures of the 20th century, but we Americans never heard much about him.
His acolytes were lesser and more egotistical, Mao and Chiang Kai-shek.
Eleni sent this article with some quotes from Master Sun about the British Empire, considering it as a whole entity, not considering where the core will-to-power might lie, which directed that empire.
Where does that will-to-power reside now?
It seems mobile and transnational, like money, come to think of it...
​ ​“The British are as cunning as the fox and as changeable as the weather and they are not ashamed of themselves… Britain seeks friendship only with those which can render her services, and when her friends are too weak to be of any use to her, they must be sacrificed in her interests. Britain’s tender regard for her friends is like the delicate care usually shown by farmers in the rearing of silkworms; after all the silk has been drawn from the cocoons, they are destroyed by fire or used as food for fish. The present friends of Britain are no more than silkworms.”
​ ​“The key policy of England is to attack the strongest enemy with the help of the weaker countries and join the weakened enemy in checking the growth of a 3rd country. The British foreign policy has remained basically unchanged for two centuries.”
​ ​“When England befriends another country, the purpose is not to maintain a cordial friendship for the sake of friendship but to utilize that country as a tool to fight a third country. When an enemy has been shorn of his power, he is turned into a friend, and the friend who has become strong, into an enemy. England always remains in a commanding position; she makes other countries fight her wars and she herself reaps the fruits of victory.”

​Yemeni Houthis claim to have killed 500 Saudi (mostly mercenary) troops and captured 2000, along with Saudi officers (Those will include lower royal family, most likely.) This operation was an ambush inside Saudi Arabia, letting the Saudi forces run into an ambush, cutting them off, then hammering them from all sides. This is a reported majority of the Saudi army.
The House of Saud has had nothing to say yet about these claims...
​https://www.theguardian.com/world/2019/sep/29/houthis-claim-killed-hundreds-saudi-soldiers-captured-thousands
https://www.aljazeera.com/news/2019/09/yemen-houthi-rebels-release-saudi-attack-video-190929130644121.html

​ ​A massive fire broke out Sunday at the the Haramain high-speed rail station in Saudi Arabia’s coastal city of Jeddah, and upon early reports the cause is as yet unknown.
​ ​Social media videos showed giant plumes of black smoke rising high above the train station and city in what's clearly a very significant incident...
​ ​The high speed rail is also seen as central to crown prince Mohammed bin Salman's efforts at drastically modernizing Saudi infrastructure to boost tourism, in order to eventually wean the economy off oil revenue dependency, in preparation for a post-oil future.

Rapes and bombings have become a daily and pervasive problem in hospitable Sweden, after foreign men from foreign wars flooded in.
Now what? The Swedish press won't publicize it, but everybody knows anyway.
https://www.gatestoneinstitute.org/14819/sweden-crime

​ ​Vasily Prozorov was an Ukrainian security service (SBU) staffer from 1999 to 2018. Since 2014, he was an expert consultant in the SBU's main anti-terror unit. In 2018, he fled to Russia. The Ukrainians now call him a traitor. Writing on his blog Ukraine Leaks, he says that in 2016, the Ukrainian government openly supported Hillary Clinton and tried to help her defeat Donald Trump.
​ ​"Former Ukrainian president Petro Poroshenko was terribly afraid of a Republican victory, believing Donald Trump would change Russia policy and lift sanctions, reducing support for Ukraine and robbing Poroshenko of his Western power base. Ukrainegate is a criminal conspiracy of representatives of Hillary Clinton's campaign and the leadership of Ukraine in the person of Poroshenko, aimed at preventing Donald Trump from winning.
​ ​"At that time, I worked at SBU HQ in Kiev. I remember the panic that gripped the power structures in Ukraine after Donald Trump's victory. They expected immediate retaliation from Washington for Ukraine's participation in the attacks on Trump. Many politicians deleted their social media posts criticizing Trump. However, as it turned out, the phony Russiagate witch hunt kept the Trump campaign from doing anything that could look like "collusion" or "obstruction" abroad. Now, however, the Ukrainegate conspiracy is starting to unravel."​   (Thanks, Eleni)

​Moon of Alabama has a good summary On the Motives Behind Whistleblower-Gate
There is so much to keep up with on this, every day, new twists.
​ ​The second attempt is a simpler construct than Russiagate. A CIA operative who was temporarily delegated to the White House constructed a 'whistleblower complain' that is completely based on hearsay and public sources. It is also about issues that are outside of the CIA's immediate business.

Today's new twists are contained here:
​ ​Zelensky might fear that if he complies with Trump’s request, then his own major benefactor, Kolomoysky, could end up in prison somewhere; and Trump might fear that if he presses Zelensky on that (as he did not do but Democrats say he did), then the entire Deep State — not only Democratic Party billionaires, but also now Republican ones — will become Trump’s enemies, and his 2020 re-election chances will therefore go to zero. Consequently: Trump will probably abandon the matter, and the till-now-unsupported and maybe unsupportable mere assumption, that Hunter Biden’s Ukrainian benefactor was Zlochevsky instead of Kolomoysky, will continue to be asserted virtually everywhere throughout the U.S. empire, for as long a time as the matter continues to remain in the ‘news’. Of course, if that turns out to be the case, then Joe Biden will continue to be portrayed in this matter as having been a crusader against corruption in Ukraine, instead of as having been the aspiring founder of yet another billionaire American dynasty.
​ ​Basically, the new Russiagate charges to replace Trump by Pence, Ukrainegate (as those charges were presented by the CIA ‘whistleblower’ on August 12th and published on September 26th), represent all of the Democratic Party’s billionaires, and many of the Republican Party’s ones, as well. It’s the pinnacle of the Obama-versus-Trump feud, because it represents the Democratic Party’s position on what was Obama’s top international achievement — his conquest (via a coup) against Ukraine.
https://thesaker.is/here-is-the-dirt-trump-wanted-from-zelensky-about-the-bidens-and-why-zelensky-doesnt-want-to-give-it-to-him-hidden-by-rampant-falsehoods-in-the-press/

Trump is enjoying some schadenfreude, as the Democratic thought-broadcasting-machine bites off more than it can chew while starting to vomit Joe Biden. Russia Today has the story...
​ ​US President Donald Trump is blasting Democrats and “their media lapdogs” in a new campaign ad, claiming they seek to impeach him for wanting to investigate corruption in Ukraine involving former Vice President Joe Biden.
​ ​The 30-second ad that Trump tweeted out Friday afternoon opens with Biden boasting about getting a Ukrainian prosecutor fired after he threatened to withhold $1 billion from Kiev. The footage is from the former vice-president’s January 2018 appearance at the Council on Foreign Relations.
https://www.rt.com/usa/469793-trump-democrats-media-lapdogs-steal/

​Tulsi Gabbard has an interview here, with "friendly" reporters for a change, and says that Elizabeth Warren has not laid out her foreign policy vision, "the most important role of a Commander in Chief".
Tulsi is kind of sloppy on some "facts", which I resent. Be Perfect!
She says that the US backing out of the Iranian nuclear deal has put Iran back to working on nuclear weapons every day.
That is not supported by facts, and is at odds with all of the non-Israeli intelligence assessments I have seen.
Iran has not been working on a nuclear weapon for over 15 years.​
They really let her go a few times that I wanted a follow-up question, but her answers were basically on-target, while avoiding risky misfires.
https://www.youtube.com/watch?v=dRKsJy92t9A

Are We Approaching the End of Super-Imperialism?
This is a good historical overview of the post WW-2 global financial epoch, long on life support, and with some really spooky stuff on the monitors. Look at CNN over there, not that heart monitor!
https://www.nakedcapitalism.com/2019/09/the-end-of-super-imperialism.html

Want To Save The Environment? De-Fund The Pentagon.​ Caitlin Johnstone​
​ ​There is no single, unified entity that is a larger polluter than America’s dishonestly labeled “Department of Defense”. Its yearly carbon output alone dwarfs that of entire first-world nations like Sweden and Portugal; if the US military were its own country it would rank 47th among emitters of greenhouse gasses, meaning it’s a worse polluter than over 140 entire nations. That’s completely separate from the pollution already produced by the US itself. None of the sociopathic corporations whose environmental impact is being rightly criticized today come anywhere remotely close to that of the Pentagon. They are going under the radar.

https://caitlinjohnstone.com/2019/09/28/want-to-save-the-environment-de-fund-the-pentagon/#comment-20937
​Mom's with higher fluoride levels in their urine gave birth to baby boys with significantly lower measured intelligence in life.
In reference to a study, entitled “Association Between Maternal Fluoride Exposure During Pregnancy and IQ Scores in Offsprings in Canada”[1], published in JAMA Pediatrics, the journal editors were stunned by a finding that fluoridated water exposure in mothers during pregnancy reduces the IQ of their sons.
https://jameslyonsweiler.com/2019/09/24/study-shows-massive-iq-decrease-in-males-with-fluoride-jama-pediatrics-journal-editors-stunned/ 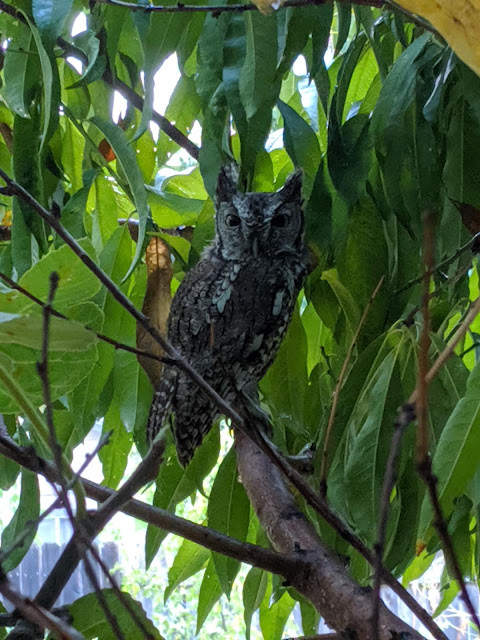 (Image of hoot owl calmly gazing eye to eye in peach tree between kitchen and garden this morning. Spent the day)