Jenny and I finished our courses of ivermectin Friday and Saturday. She had the longer course of treatment, since it began with exposure, but finished first.
We both got gradual recurrence of symptoms after finishing ivermectin, notably starting with a metallic taste and increasing phlegmatic cough, and advancing to mild headaches, fatigue and mild temperature elevation (100.3F for me last night).
Jenny got a positive COVID rapid test this morning. Nobody showed up at the test site I went to. I waited for half an hour. I guess they are out sick.
About 5 hours later, I did get a rapid Abbot test, which turned immediately and darkly positive as the nasal-swab juice hit the test line. Not everybody will understand how immediately happy this made me feel to finally have a positive COVID test result in my hands.
It's not on a database anywhere, but I'm posting a picture of it, taken in the car when we got home. 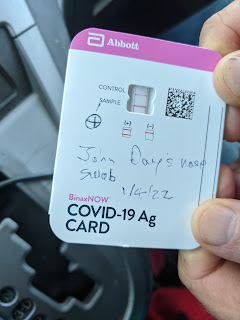