The big-rig towing companies all opted out of the offer to tow the Freedom Convoy off the Ambassador bridge.
Even if the tow truck companies were willing to comply, heavy-duty towing experts say that it could be impossible to move them all without driver cooperation.
https://timcast.com/news/towing-companies-refusing-to-move-freedom-convoy-trucks-despite-government-contracts/
​"The Beeb" reported that after the trucks did exit the Ambassador Bridge, under duress, a lot of people walked on to replace them.
​  ​More were ticketed and towed in the evening. But vehicles are no longer the problem, says Jason Bellaire, deputy chief of operations for the Windsor Police Service.
The problem is the people, he says.
​  ​"We need to make it exceeding clear they're not welcome to stay here, they're not welcome to disrupt our bridge traffic, they're not welcome to disrupt our community," he told the BBC.
​https://www.bbc.com/news/world-us-canada-60364821
Seeking an end to COVID mandates, convoy of cars travel to Peace Bridge
Buffalo Police reported no issues and said an estimated 100 vehicles and 300 people took part in the demonstration along Busti Avenue near the bridge
https://www.wgrz.com/article/news/local/convoy-of-cars-travel-to-peace-bridge-seeking-end-to-covid-mandates-pandemic-buffalo/71-28c8370b-1dd2-4b4b-9784-95e906e1762d
​Professor Anthony Hall, in Canada: ​The Truckers Take Abuse in Ottawa: COVID Crimes Committed Behind the Cover of “Emergency Measures”
...These claims of emergency have never been seriously spelled out, let alone proven, in front of judges. Hence our judges have shown themselves to be unequal to the responsibilities of defending the rule of law when it is most subject to severe attack...​
​  ​Trudeau seems to have come unhinged in his lunatic obsession to only talk about, rather than with, the representatives of the Canadian Truckers’ Convoy. The truckers are holding their ground in Ottawa until they are invited to negotiate terms with Canada’s national government...​ ​
​  ​Trudeau makes no allowance for the fact that the truckers have attracted large and enthusiastic support when they wheeled across the country. In doing so they became envoys of a demonstrable popular upsurge felt by many Canadians.​..​
https://www.globalresearch.ca/truckers-take-abuse-ottawa-covid-crimes-committed-behind-cover-emergency-measures/5769945
Police fired tear gas at demonstrators on the Champs-Élysées avenue in Paris on Saturday shortly after a "Freedom Convoy" protesting against Covid-19 restrictions made it into the French capital.
https://www.france24.com/en/france/20220212-paris-deploys-police-as-convoy-protesting-covid-rules-approaches-capital
https://www.zerohedge.com/political/thousands-paris-police-brace-freedom-convoy
​That looks like more than 10,000 Australians to me, but it's hard to count. Where's Waldo?​

Thousands of protesters marched through Australia's capital to the parliament building on Saturday to decry Covid-19 vaccine mandates, the latest in a string of rallies against pandemic restrictions around the world.
Demonstrators packed Canberra's streets before massing outside the parliament, some waving the red Australian ensign flag associated with "sovereign citizens" who believe national laws do not apply to them.
Protesters, many with children, rallied under bright skies brandishing banners proclaiming "Fight for Your Freedom & Rights", "Free Aus Freedom Now", or "No forced drugs" written above a symbol of a syringe.
Police estimated there were up to 10,000 protesters. They were "generally well behaved", a police spokesman said.  https://www.nst.com.my/world/world/2022/02/770854/thousands-protest-vaccine-mandates-australian-capital

A U.S. appeals court on Wednesday refused to reinstate a vaccine mandate for federal employees, declining to overturn a ruling by a federal district court that had frozen the policy and setting the stage for a Supreme Court battle.
https://childrenshealthdefense.org/defender/appeals-court-freeze-vaccine-mandate-federal-workers/?
Big Tech Censored Dozens Of Doctors, Over 800 Accounts For COVID-19 ‘Misinformation,’ Study Shows
https://dailycaller.com/2022/02/09/big-tech-censorship-facebook-youtube-covid-19-mrc/
​From double-boosted Israel:  New study: 133x risk of myocarditis after COVID vaccination
Comparisons with myocarditis rates following infection now irrelevant as vaccination no longer prevents infection.
https://www.israelnationalnews.com/news/321238
​Falsifying medical-report data from recent years around the clock in order to keep Americans safe...
Horowitz: The Pentagon’s RESPONSE to the explosive DOD medical data is an even bigger story than the data
https://www.theblaze.com/op-ed/horowitz-the-pentagons-response-to-the-explosive-dod-medical-data-is-an-even-bigger-story-than-the-data
​From the UK: ​
Deaths among Triple Vaccinated increased by 495% in January with the Vaccinated accounting for 4 in every 5 Covid-19 Cases, Hospitalisations & Deaths since December
​  ​Official data from Public Health Scotland confirms the vaccinated population have accounted for 4 in every 5 Covid-19 cases, hospitalisations and deaths over the past two months.
​  ​But a side by side comparison of those two months suggests the Covid-19 booster campaign has been a complete failure because the percentage of Covid-19 cases, hospitalisations and deaths have all gone down in the unvaccinated population whilst increasing drastically in the triple vaccinated population.
https://dailyexpose.uk/2022/02/11/triple-vax-deaths-increase-by-495-percent-pandemic-fully-vaccinated/
​  You may have seen pictures of micro-graphene in COVID vaccine vial contents repeatedly. I sure have, and I wondered how that could happen. What possible utility could it be. These links came to me from different sources, and all recently, which suggest the possibility that these are self-assembling micro circuits, which are a a thing these days.​
https://www.bitchute.com/video/cwUWKuvgC9jJ/
https://nzdsos.com/2022/02/08/its-a-small-world-micro-tech-in-the-jabs/
https://archive.fo/2022.01.29-225016/https://masksaredangerous.com/nanotech-in-the-shots/ 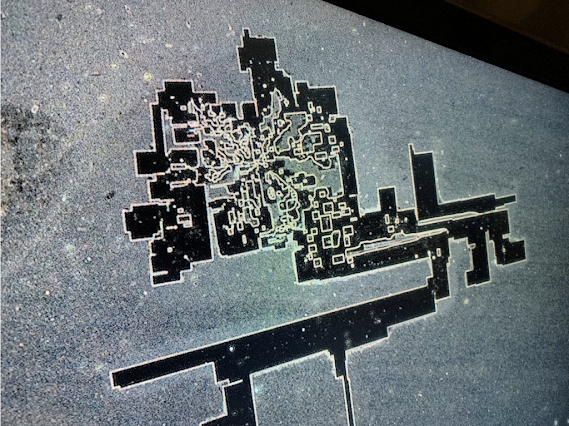 It's "not enough" data, in a way, but it's all damning, so it would never be a question at all in normal times. Studies would be halted.
Breaking: FDA Postpones Meeting on COVID Shots for Kids Under 5 After Pfizer Says Not Enough Data. But Don’t Let Up!
https://childrenshealthdefense.org/defender/fda-postpones-meeting-covid-shots-kids-pfizer/?
The Chinese Bat Virus That Never Shows Up in Any Chinese Bats​
​ ​The WHO team visit to Wuhan was in February 2021, so this means after two years of looking, and “tens of thousands” of samples, no one has found SARS-CoV-2 naturally occurring in animals in and around Wuhan, China.
​  ​As noted earlier this week, SARS-CoV-2 is spreading like wildfire among American white-tailed deer.  The CDC affirms “many mammals, including cats, dogs, bank voles, ferrets, fruit bats, hamsters, mink, pigs, rabbits, racoon dogs, tree shrews, and white-tailed deer can be infected with the virus.” Gorillas at the Dallas zoo, snow leopards at a Bloomington zoo, lions at the Akron Zoo, – you name the animal, there’s a good chance they’ve caught Covid-19.
​https://www.nationalreview.com/corner/the-chinese-bat-virus-that-never-shows-up-in-any-chinese-bats/
​America asks: "A war with Russia? Before or after the Super Bowl?"​  Pepe Escobar has the diplomacy story.
​  ​French Economy Minister Bruno Le Maire – the inspiration for one of the main characters in Michel Houellebecq’s cracking new book, Anéantir – said that the launch of Nord Stream 2 “is one of the main components of de-escalating tensions on the Russian-Ukrainian border.” Gallic flair formulated out loud what no German had the balls to say.
​  ​In Kiev, after his stint in Moscow, it looks like Macron properly told Zelensky which way the wind blows now. Zelensky hastily confirmed Ukraine is ready to implement the Minsk agreements; it never was, for seven long years. He also said he expects to hold a summit in the Normandy format – Kiev, the breakaway republics of Donetsk and Luhansk, Germany and France – “in the near future”. A meeting of Normandy format political advisers will happen in Berlin on Thursday.​ ​ A few sharp minds in the Beltway, emailing their networks, did notice in my column how “the goal of Russian and Chinese policy is to recruit Germany into a triple alliance locking together the Eurasian land mass a la Mackinder into the greatest geopolitical alliance in history, switching world power in favor of these three great powers against Anglo-Saxon sea power.”
​  ​Now, a very high-level Deep State intel source, retired, comes down to the nitty gritty, pointing out how “the secret negotiations between Russia and the US center around missiles going into Eastern Europe, as the US frantically drives for completing its development of hypersonic missiles.”
​  ​The main point is that if the US places such hypersonic missiles in Romania and Poland, as planned, the time for them to reach Moscow would be 1/10 the time of a Tomahawk. It’s even worse for Russia if they are placed in the Baltics. The source notes, “the US plan is to neutralize the more advanced defensive missile systems that seal Russia’s airspace. This is why the US has offered to allow Russia to inspect these missile sites in the future, to prove that there are no hypersonic nuclear missiles. Yet that’s not a solution, as the Raytheon missile launchers can handle both offensive and defensive missiles, so it’s possible to sneak in the offensive missiles at night. Thus everything requires continuous observation.”
https://www.strategic-culture.org/news/2022/02/09/do-you-want-a-war-between-russia-and-nato/
​Battle of nerves? Game of chicken​?
Both US & Russia Evacuate Embassies in Kiev Ukraine
"Military action may commence at any time and without warning," the US has said.
Russia's Foreign Ministry too has confirmed it's reducing its diplomatic presence in the country, including its embassy and consulates. A statement says Moscow fears "possible provocations from the Kyiv regime or third countries" that could "seriously complicate the security situation."
https://www.zerohedge.com/geopolitical/biden-tells-americans-ukraine-leave-now-things-could-go-crazy-quickly
Biden is rooting for Russia to invade Ukraine, Tulsi Gabbard says​   (from Russia Today)
​  “I have a hard time seeing how President Biden or anyone can say with an honest face, ‘We are defending democracy,’” Gabbard told Carlson. “And the reason is because our own government has publicly supported these authoritarian actions by the Ukrainian president in shutting down their own political opposition … This sounds familiar to some of the things that unfortunately, we're seeing play out right here at home.”
https://www.rt.com/news/549182-gabbard-says-biden-wants-russia-ukraine-war/
​Eroding the almighty dollar:
​  Argentina is trapped in $44 billion of IMF odious debt taken on by corrupt right-wing regimes. Seeking alternatives to US hegemony, President Alberto Fernández traveled to Russia and China, forming an alliance with the Eurasian powers, joining the Belt and Road Initiative.
https://multipolarista.com/2022/02/06/imf-debt-argentina-russia-china-belt-road/
Civilian Observer
(pictured with daughter, Holly and her husband, Tommy dining on screen porch yesterday) 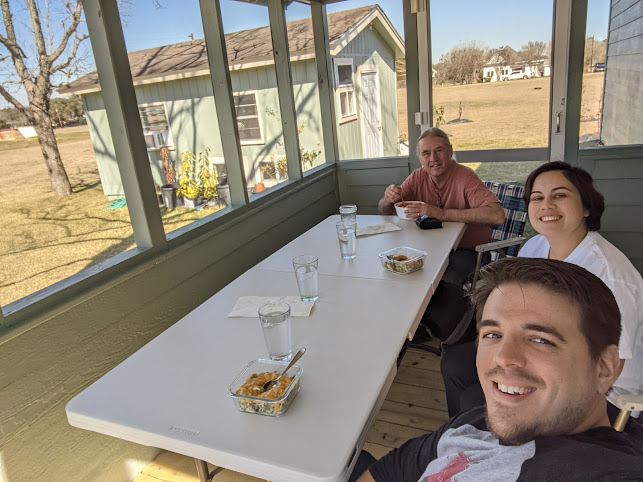