Spartacus at ICENI Bulletins, argues   It Wasn't a Lab Leak, it Was Intentional , but the release of SARS-CoV2 could readily have been both.
https://iceni.substack.com/p/it-wasnt-a-lab-leak-it-was-intentional
There is an embedded assumption that SARS-CoV2 virus was "released" once into the human population, then spread like wildfire, but there is evidence that multiple strains of the virus, only distantly related, cropped up in different places and at different times.
The military knows that weaponized viruses leak out of labs by infecting humans. This has always happened. The military makes contingency plans. The military monitors for leaks, and keeps their findings secret, often actively denying the truth.
If a virus leaks out and starts killing people, perhaps from Ft. Detrick Maryland  something must be done to obscure the origin.  https://www.johndayblog.com/2021/06/fort-detrick.html
The Ethical Skeptic presented excellent genomic and viral spread analysis which showed that the Omicron variant had a most recent common ancestor with any prior COVID strain, no later than March 2018. Omicron was clearly different, clearly a game-changer and clearly a fresh lab-release.
https://theethicalskeptic.com/2021/11/15/chinas-ccp-concealed-sars-cov-2-presence-in-china-as-far-back-as-march-2018/
One of the early, large-scale national epidemics of COVID occurred in Iran, after 3 days of nationwide mourning in the streets for General Soleimani, assassinated in Iraq, on a State visit, apparently carrying out a diplomatic mission on behalf of the US, by American drones.
http://thesaker.is/financial-n-option-will-settle-trumps-oil-war/
The timing of the street demonstrations of mourning was in America's hands. Preparations could have been made to release SARS-CoV2 into the Iranian population during the public speeches at these mass gatherings. A lot of Iranian government officials caught COVID and spent January 2020 sick or dying.
Considerations of how to obscure the trail of spread can take many forms, including covert use as a weapon, interpreted as natural-spread.
If SARS-CoV2 accidentally leaked from Ft. Detrick in May/June 2019, then contingency plans to obscure the origin would have been activated. Event 201 and the inclusion of US forces in the Wuhan Games that same mid-October 2019 (first time ever), would have helped to obscure the original leak.
Using the weapon as a covert bioweapon would also present itself as a one-time opportunity, which would already exist as a contingency plan somewhere in DARPA.
What entity did release Omicron, and why? I don't know.
The Omicron release immediately appeared to be a friendly-action towards most humans. Maybe that was incidental to it being an attack upon the PANDEMIC control-narrative, but attacking that control-narrative is still a friendly action towards non-elite humans.
Intentional release of Omicron, a little over a year ago, implies that some elite faction, opposed to the current global cabal, sabotaged their control-narrative and plan by releasing a milder virus, which would act as a self-spreading vaccine against the more fatal strains.
This did remove the fear-of-COVID from a majority of people. Pandemic-fear now only works as a control-narrative in a minority of people in the US, Europe, China and the world.
What is next in the elite contest for global power. WAR as a control-narrative is tried-and-true, but slowly-losing has never been an effective iteration of that narrative. Everybody can only say they are "winning" for a limited period of time, then what?
I have been avoiding this 2 hour video, basically a shared lecture by Colonel Douglas Macgregor US Army ret. and Michael Vlahos, who has extensive military, CIA and State Dept. experience, and lectures at an American War College. (Eleni said I had to watch every minute, as there is no transcript. She was serious.)
If you watch from 1:33 you will catch the last half hour as Macgregor segues into the message given later. It gets closer to that message after 1:50.
The last 10 minutes, starting 1:53 gets to the point of regime-change in America. From 1:56 , the last 7 minutes, is that American regime-change message.
"War of decision" is the theme that develops into a need to change the "courtiers" in the "court of the American Empire".
From 1:59:30 there is discussion about getting "new-blood" in the governing elites, because the elites are globalists, not serving the interests of American citizens or even the American economy.
The last 2 minutes is "The War of Decision is at Home" part.
The failure of the "wholly owned by the Washington elites" War in Ukraine will provide the opportunity to wrest power from them in a "revolution", which Macgregor "thinks is coming".
"Revolution" is a term much bandied about, but both men are visibly tense in the last few minutes. Macgregor relaxes some  after making the decisive statement.
Who is the target audience for this message? Does it have multiple target audiences? Several levels of meaning? Is it a signal? To whom?
https://www.youtube.com/watch?v=zIIM043x_FI
Drummer Boy (pictured with completed closet, now starting baseboards and trim) 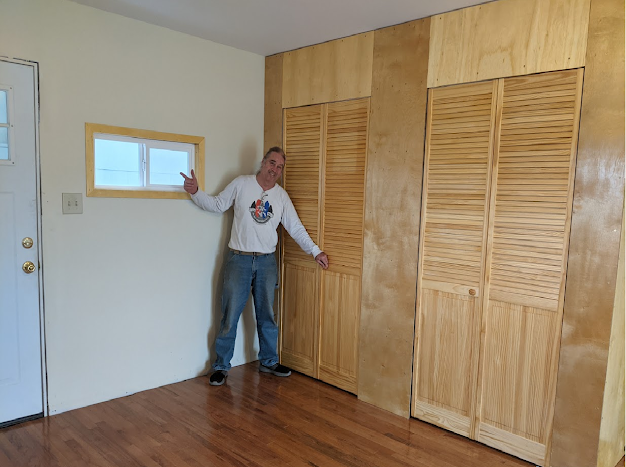