Dogs And Politicians Without Collars

The World is Full of Dogs Without Collars, 3/4 of the billion dogs in the world are free-dogs, village-dogs, poi-dogs, res-dogs, dingos...
This is a "superbreed" with Asian and European branches, that co-evolved with human agricultural communities, on the outskirts, not bred by humans, not domesticated wolves. We can learn about ourselves here. Thanks Colleen.
"They have remarkably varied connections to human beings. Some live completely on their own at dumps. Some are neighborhood dogs, recognized and perhaps given handouts by people who live in a certain area. Others may feed and breed on their own, but spend nights at the homes of people."
http://www.nytimes.com/2016/04/19/science/the-world-is-full-of-dogswithout-collars.html?_r=0
Additional Evidence of Mind-Boggling Fraud Emerges from New York Primary (Whu is my mind not boggled?)
Alba Guerrero was dumbfounded. She’d arrived at her polling place in Ozone Park, Queens only to be told that she had been registered as a Republican since 2004. That was news to her. She remembers registering to vote for the first time as a Democrat so she could vote for Barack Obama in the general election in 2008. When she recently moved from Manhattan to Ozone Park, in Queens, she re-registered at the DMV, she says, and even checked online on March 9th to be sure she was registered at her new address. But when she showed up to vote for Bernie Sanders at PS63 on Tuesday, she says she was told she couldn’t. New York is a closed primary, where only registered Democrats can vote in the Democratic Primary—and voters had to be registered by last October. She was told—very politely, she wants to make clear—by poll workers to take it up with a judge. She was given a court order in nearby Forest Hills. Guerrero drove to the Queens County Board of Elections and pled her case, but Judge Ira Margulis initially turned her away.  “I said, ‘Excuse me, that’s not my signature,’” she said. “It’s not my handwriting. It showed completely different signatures.”
http://libertyblitzkrieg.com/2016/04/20/additional-evidence-of-mind-boggling-fraud-emerges-from-the-new-york-primary/

Greg Palast on how New York and US Elections are Being Stolen: (Brooklyn elections worker quote below)
“I just got off my 17 hour shift as an election official. In my election district, out of 166 Democratic voters, 39 were forced to file affidavit ballots. The last [election] I worked in, exactly ONE voter needed an affidavit ballot.”
Palast: Brooklyn is under the control of the Kings County Democratic Party, one of the last of the big city machines. Would they attack their opponents’ voter registrations? I don’t have to guess: in my wasted younger days, I was in the Brooklyn County elections office with the hacks where we were assigned by the Party to challenge voters’ signatures en masse. (I wouldn’t and nearly lost my state job.)
http://www.nakedcapitalism.com/2016/04/greg-palast-on-how-the-new-york-and-us-elections-are-being-stolen.html

Greece could leave Eurozone on Brexit vote. Interesting analysis Something really has to overtly break, soon. (Maybe Europe wants this to just kettle all the refugees that get out of Turkey in Greece, with neither country being part of EU.)
http://www.telegraph.co.uk/business/2016/04/20/greece-could-leave-eurozone-on-brexit-vote/

How can politicians in US and Europe get TTIP passed with so much public sentiment completely against it? Time is short. Obama and Merkel meet to work on strategy.
http://www.reuters.com/article/us-europe-usa-trade-idUSKCN0XI0AT

"Despite all these differences, Saudi Arabia and America are not getting divorced," said Bruce Riedel, director of the Intelligence Project at the Brookings Institution and a former CIA official. "We need each other." [Which is also why none of the much demanded revelations by the US public about Saudi involvement in the Sept 11 bombing will ever be revealed.]
http://www.zerohedge.com/news/2016-04-21/unprecedented-snub-saudi-arabia-demands-recalibration-relationship-us 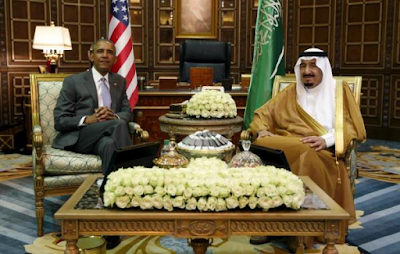 Maintaining Fictions
Posted by John Day at 10:25 AM