John Helmer in Moscow, "Dances With Bears", is the longest-serving western journalist in Russia, and author of some insightful books.
He recently said that US, Poland and local NATO members sabotaged the pipeline right away.
In this 30 minute interview (sorry, not much transcript) Helmer says that there is open disagreement in Washington power circles between Galician-interest-neocons (Nuland, Blinken),  which want to keep doubling down on war and the "Irish Catholics" (Kerry, Biden), who want to pause and think about this for a moment. (The news about the American P-8 Poseidon naval-bomber being right there when the sabotage happened is bound to be impacting policy debate in the halls-of-power. Are there secret negotiations with Russia yet?)  Thanks FS.
http://johnhelmer.net/waiting-for-nuclear-war-in-washington-cockahoop-in-warsaw-the-germans-run-for-the-bunker-again-gorilla-radio-reveals-what-happens-next/
Modern economic theories have been developed in the past 300 years, a period of exponential growth of industrial capitalist economy, and more lately global financial capitalism, which is not the same, but assumes exponential-growth, while being st to maximally parasitize real-economy, which shrinks real-economy, independent of other physical limits to economic growth, like resource depletion and pollution.
With "Parasitism" being the-name-of-the-game, there are also many covert parasitic draws speeding collapse of the financial system. The financial system is the guide for the physical economy, and it has lately placed almost all decision-making in the hands of short-term-extraction specialists, maximizing quarterly profits.
The real-economy is fundamentally the life support system for humans on earth, but it has a lot of optional attachments, too. The optional economic sectors will suffer from a widespread fall in "discretionary spending" as people are forced to focus on core needs of food, fuel and shelter.
Globalism has been "deflationary", reducing costs and prices, but at the cost of poor foreign workers in high-pollution countries. That is like a one-time strip-mining of those people and countries, and it appears to be mostly over.
The current inflation in the world is not due to economic overheating, as was arguably a big part of the case in the years around 1980, when Paul Volcker stopped $US inflation with extremely high interest rates, which mainly hurt working-people and industry.
This inflation is due to a fall in production of goods and services, superimposed upon a chronically and acutely increased supply of money. The world was accustomed to the increase of cheap money, but real-economic-production has fallen-and-can't-get-up. The starved, bled and overloaded mule has given more than it can sustain and needs the bloodletting to stop, more feed, and the load reduced.
Raising interest rates to reduce inflation hurts the poor mule. Raising interest rates extracts more blood from industry and workers, at the same time that the industrial mule is being starved by oil and natural gas shortages and price-increases.
What's a central-planner to do? Wage-Price controls, last implemented under Richard Nixon, in a time when real economic growth still persisted, but prices had shot up from the American default on gold, and the oil-price-wars, left a bad-taste in every mouth. Such measures pick some businesses to bankrupt, and reward sly manipulation of financial loopholes by parasites extracting value. They are a form of central-economic-planning without much "planning", a short-term move.
Global central banking is suddenly making a broad announcement through the UN that this should be done in the whole world.
The UN Demands All Central Banks Stop Rate Hikes And Switch To Price Controls Instead​  ,  Michael Every of Rabobank
https://www.zerohedge.com/markets/un-demands-all-central-banks-stop-rate-hikes-and-switch-price-controls-instead
Moon of Alabama says "The expected financial crash is finally here".
​  ​The central banks have misdiagnosed the reason for the currently high inflation rates. They were caused not only by too much stimulus provided by governments and the central banks but to a large part by the lack of supplies which is to the consequence of the pandemic and the 'western' sanctions following the war in Ukraine. By increasing interest rates the central banks fought against the wrong enemy. They made things worse.
https://www.moonofalabama.org/2022/10/the-expected-financial-crash-is-finally-here.html#more
​Starved mule... ​ BRITISH ECONOMY IS COLLAPSING; IT’S THE ENERGY, STUPID!
https://southfront.org/british-economy-is-collapsing-its-the-energy-stupid/
Charge more for mule feed as the mule eats less and get paid more (temporarily).
​  ​Goldman strategists recap the latest developments that helped propel oil sharply higher today, namely the reports that in its first in-person meeting in Vienna this Wednesday, the cartel may cut oil output by as much as 1.5 mmb/d...
​  ​Reports suggest that OPEC+ is considering a production cut at its meeting on Wednesday, October 5, potentially larger than 1 mb/d. While such a cut would occur amid one of the tightest markets in recorded history, and ahead of a potential decline in Russian exports later this year, such a decision could be justified by the recent large decline in prices, down 40% since their June peak, with mounting global growth concerns.
https://www.zerohedge.com/markets/opec-taking-fed-and-goldman-buying-every-barrell-it-can-find
​Everybody spies on everybody.  China drops the gauntlet on NSA’s serial cyberattacks
Beijing accuses US spy agency of using trojans, malware and other cyber weapons to bombard defense industry-linked university
https://asiatimes.com/2022/09/china-drops-the-gauntlet-on-nsas-serial-cyberattacks/
North Korea is always sensitive about western military exercises in South Korea.
Mach-17 ICBMs, are a form of "political speech". They are expected to test another nuclear device underground soon.
NORTH KOREAN BALLISTIC MISSILE DEFIANTLY FLEW OVER JAPAN
https://southfront.org/north-korean-ballistic-missile-defiantly-flew-over-japan/
"Stern-response" escalations.
South Korea Vow "Stern Response" After North Korea Ballistic Missile Flies 4,500km At A Speed Of Mach 17
https://www.zerohedge.com/military/japan-warns-residents-seek-shelter-immediately-after-north-korea-fires-missile-which-flies
​"Demand destruction" in the real-economy?​ Excess mortality in the non-productive-human sector? Thanks Jeremy.
GPs to receive incentive payments to deliver ‘accelerated’ care home Covid boosters
https://www.pulsetoday.co.uk/news/breaking-news/gps-to-receive-incentive-payments-to-deliver-accelerated-care-home-covid-boosters/
​Homegrown-Eater (pictured with fresh tomatoes, peppers and okra)​ 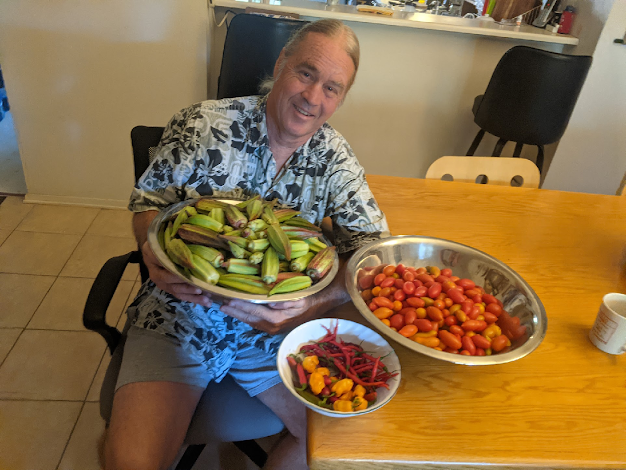