John Prine, the Mark Twain of American songwriters, is in the hospital on a ventilator with coronavirus.
"Stable", says his wife.
Here is a prayer he recorded a long time ago:
https://www.youtube.com/watch?v=9CDLCr0fxOQ

Reporters hounded President Trump during yesterday's White House press conference about a Monday phone conversation between Trump and Russian President Vladimir Putin, where the two leaders agreed to hold talks about the chaos in the oil market. And in a gesture of goodwill, Russia - which has only recently started to report large numbers of COVID-19 cases - is sending a military transport plane full of "medical equipment and masks" to aid American governors like Andrew Cuomo in their time of need.
Putin offered to send the aid during Monday's call, while the two leaders discussed how best to respond to the virus...

"Trump gratefully accepted this humanitarian aid," Kremlin spokesman Dmitry Peskov said Tuesday according to Russia's Interfax news wire. Trump enthusiastically touted the aid after the call. Russia had agreed to help because the pandemic "affects everyone without exception and is of a global nature."
https://www.zerohedge.com/geopolitical/russia-sends-very-very-large-planeload-masks-medical-equipment-us

​ ​On Tuesday it was revealed that Denis Protsenko, the head doctor at the infectious diseases hospital treating coronavirus patients in Moscow, tested positive for COVID-19.
​ ​Just a week ago Dr. Protsenko was photographed shaking hands with President Vladimir Putin, during the Russian leader's visit to the hospital, where he donned a full protective Hazmat suit to visit patients. But during most of his interaction with Protenko, Putin wasn't wearing the protective gear.
​ ​Putin's office now reports he'll conduct his duties remotely, in self-isolation after the exposure. "The president prefers these days to work remotely,"
https://www.zerohedge.com/health/putin-self-isolates-after-shaking-hands-infected-doctor-moscow-hospital

"Sailors Don't Need To Die": Captain Of Nuclear Carrier With Over 100 COVID-19 Cases Pleads For Help
In an astounding plea for help, the captain of the nuclear aircraft carrier USS Theodore Roosevelt has urged top command of the US Navy to take drastic action after more than 100 sailors aboard the ship have been infected with the coronavirus.
More than a week ago it started with a handful of COVID-19 cases, which by the end of the week spiked to 36, causing the West Pacific-deployed carrier to dock at a naval station at Guam, ordering infected crew members out of the some 5,000 total into makeshift quarantine facilities, including a basketball gym hastily transformed for that purpose.

All across America, store shelves are emptying and people are becoming increasingly frustrated because they can’t get their hands on needed supplies.
Most Americans are blaming “hoarders” for the current mess, but it is actually much more complicated than that.  Normally, Americans get a lot of their food from restaurants.  In fact, during normal times 36 percent of all Americans eat at a fast food restaurant on any given day.  But now that approximately 75 percent of the U.S. is under some sort of a “shelter-in-place” order and most of our restaurants have shut down, things have completely changed.  Suddenly our grocery stores are being flooded with unexpected traffic, and many people are buying far more than usual in anticipation of a long pandemic.  Unfortunately, our food distribution systems were not designed to handle this sort of a surge, and things are really starting to get crazy out there...

Because of the coronavirus pandemic, more people are showing an interest in starting home gardens. Oregon State University‘s (OSU) Master Gardener program took notice of the growing interest.
To help citizens who want to grow their own food, the university kindly made their online vegetable gardening course free until the end of April. OSU’s post on Facebook has been shared over 21,000 times.
http://endoftheamericandream.com/archives/supplies-are-starting-to-get-really-tight-nationwide-as-food-distribution-systems-break-down

This vegetable gardening advice is free, too. The garden and gardener, this April morning,are pictured below.
http://www.johndayblog.com/2016/07/liberty-garden-central-texas-climate.html 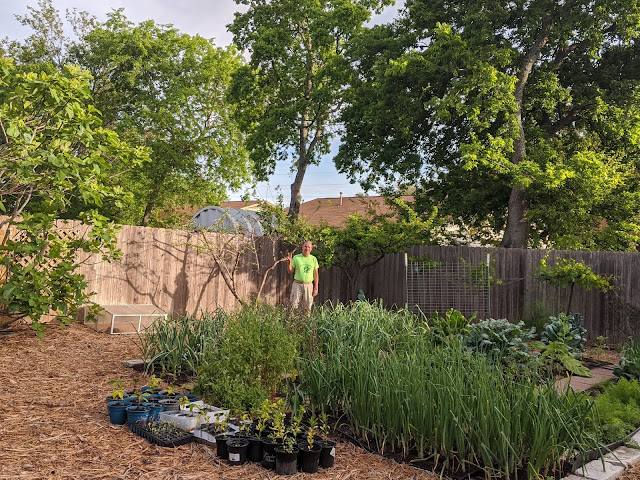 Americans stopped buying cars. Big new experiment.
https://www.zerohedge.com/economics/there-are-basically-no-sales-us-auto-industry-enters-total-collapse-result-nationwide
Nextstrain tracks evolution of viral RNA genome mutations over time from the original L-strain, described in Wuhan in early January. It does not seem to track the S-strain, which appeared right after that, and was very different in some areas of the genome, not looking like that happened by mutation, but rather cutting and splicing. Completely excluded from this data is Iran, which reportedly has a different strain. Most if this data is derived from one type of sequencing machine, and the design of this study is to ONLY track normal sequential mutations at the typical rate, not viral genomes of a different lineage, as it is described.
https://nextstrain.org/ncov
https://www.zerohedge.com/health/there-are-least-8-strains-coronavirus-heres-what-we-know
https://www.usatoday.com/story/news/nation/2020/03/27/scientists-track-coronavirus-strains-mutation/5080571002/

Here at home:
The City of Austin's public health department just reported that 28 young adults who recently returned from a spring break trip to Cabo have all tested positive for COVID-19, a local TV news station reports.
These students were part of a group of roughly 70 mostly UT Austin students left for Cabo a week and a half ago. So far, nearly half of that group has tested positive, while the rest have been warned to remain in self-isolation. The university confirmed that it was mostly UT students.
https://www.zerohedge.com/geopolitical/28-spring-breaker-covidiots-test-positive-texas-after-group-trip-cabo

Remember the doctor in Wuhan who had to sign a paper saying he had been a counterrevolutionary for telling people there was a new killer virus. He recanted, then died from it.
​ ​US Health care systems have warned emergency room doctors and nurses that if they speak out about working conditions inside a hospital, they will be fired, reported Bloomberg.
​ ​Ming Lin, an emergency room physician in Washington state, lost his job last week after he spoke to a local media outlet about the lack of protective gear for staff at Puget Sound area hospitals.
​ ​Hospital staff at the NYU Langone Health system were recently warned that if they spoke to the media without authorization, they would be terminated.
https://www.zerohedge.com/health/us-hospitals-firing-doctors-and-nurses-who-speak-out-about-lack-gear

Hydroxychloroquine/Plaquenil prescriptions triple overnight, following FDA approval as treatment for novel-coronavirus. Plaquenil is back ordered in many areas.
https://www.zerohedge.com/geopolitical/hydroxychloroquine-demand-triples-overnight-following-fda-approval
​Treating With Vegetables​
Posted by John Day at 11:27 AM