I worked a full day at clinic yesterday, not just the afternoon, as I usually do, because I went in to help work out the flows, tent placements, car greeting and routing, parking spots for drive up swabs and so on.,
We have a covered waiting area by the south entrance, and we have put a big tent in it, and a portable privacy fence around it for COVID testing patients to wait outdoors. It is really the best sheltered place, but there is another, smaller space that can serve as a waiting area, if we have to put two exam tents in this space. The greeting/masking desk is in front of the entry, and we can locate a provider-space for gowning/gloving, specimens, documents nearby and sheltered also. We got it laid out, and still, we wait...
"The Wai-ai-ting is the hardest part", quoth Tom Petty, but it's not quite true.
The first thing a medical student learns on-call is to deal with onslaughts of urgent work, emergencies all night and day. The later, and more psychological challenge is to deal with the lulls, the unnervingly quiet periods, while awaiting the onslaught.
Due to Austin, Texas cancelling South By Southwest on Friday March 6, a full week before spring break, then cancelling school the Friday before spring break, a strong signal was sent early, before Austin had confirmed COVID cases (or tests, really). That first weekend of spring break, the wife of the UT president, then the president tested positive, after schmoozing donors on the east coast for a week or two. Austin was shut down by the time we heard that, voluntarily shut down. The restaurant closures did not come until after spring break, but traffic on all the streets had already dried up, and restaurants were largely empty. Grocery stores had already cut hours and had people waiting outside to keep aisles uncrowded inside. The mandatory shuttering made very little change.
Austinites were early adopters. Austin continues to have a trickle of COVID cases, as our ability to test gradually increases, and our hospitals and clinics are waiting with the decks cleared for action. Waiting...
Austin/Travis-County has 351 confirmed cases this morning, in something like a million people. The Health Department is still able to trace contacts. My first positive patient did not have a fever. I broke protocols to test her, because she lost her sense of smell. As of yesterday afternoon, she was feeling better, but we will check on her again today. She remains "minimally symptomatic". University Hospital did not have a COVID patient, but my brother Robert's hospital has 2.
There are a million people in this area, who have not had novel coronavirus infection, and will eventually get it, we presume.
At this rate, it will take over a decade for everybody to get infected. That seems un-doable, since you can only do so much work at home, and the internet is bound to break some day. Everybody at work was somewhat uncomfortable with the waiting yesterday. I recognized the pattern in myself. It must be embraced.
Those of you in New York are in a different boat, a cruise-ship, hunkered down with a clear and present threat.
What we know from the 1918-1919 Spanish Flu epidemic is that having a long quiet quarantine is the best possible thing, the least damaging to society, the economy, and tears up the fewest families with untimely deaths.
Extended, uneasy bored waiting is success, the best we can do.
In Austin, it is spring. A coworker took a picture of me with the artichokes a few days ago, out in the vegetable garden I planted for my coworkers, which I was tending a little, as I do. Thanks LouAnne.
The new staff entrance is through the garden and break-patio area. It's getting attention. People are cropping kale and chard, and picking and eating the sugar-snap peas. The magic may be starting to work. I have planted this garden 4 years ago as a subliminal invitation to healthy, humanizing change, in the transition, which is now upon us. There are other humanizing and natural changes for us, as the machine tries to completely isolate and de-humanize us. We are the human animals which nature evolved so gradually to work effectively in small groups, to grow food and take care of each other, and emergencies. That is where our strengths lie.
We must now explore our human strengths as we await the onslaught of dread contagion.
This is our transition to a future more human or less human.
It is our future to build as cooperative groups or as isolated slaves. 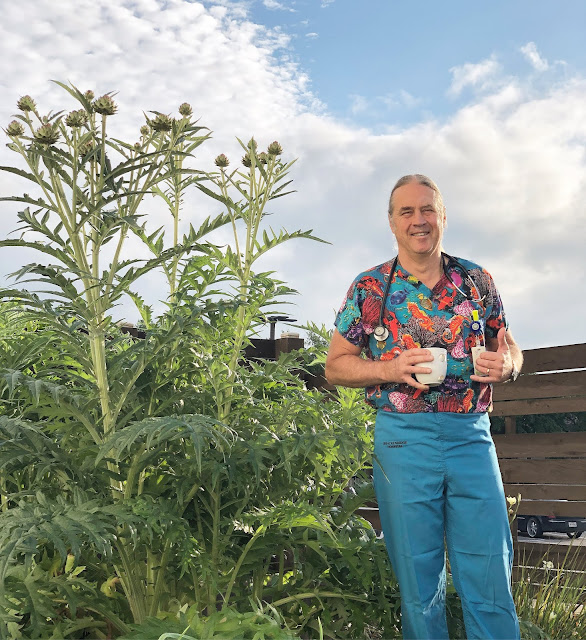 The Pentagon has fired the Captain of the aircraft carrier Teddy Roosevelt, who said that his sailors did not have to die of coronavirus, since we were not at war. So he was wrong, I guess.
https://www.zerohedge.com/geopolitical/pentagon-fires-navy-captain-who-spoke-out-about-response-outbreak-aboard-aircraft

Who are our dark overlords and how do they enslave us? Funny you should ask.
Who are the Narco-Terrorists: George H. Walker Bush: The Bush Family and the Mexican Drug Cartel

The CIA has been "fighting propaganda" in America for 70 years, by using counter-propaganda, to keep us all from getting hoodwinked and losing faith in our government, wars, and necessary national policies. Gotta' break some eggs, though...
Udo Ulfkotte  is a well-known German journalist and author of numerous books. He worked for 25 years as a journalist, 17 of which were for Frankfurter Allgemeine Zeitung (FAZ), including his role as editor. In his 2014 book “Journalists for Hire: How the CIA Buys News” Ulfkotte goes over how the CIA along with German Intelligence (BND) were guilty of bribing journalists to write articles that either spun the truth or were completely fictitious in order to promote a pro-western, pro-NATO bent, and that he was one of those bought journalists...
Udo Ulfkotte has since passed away. He died January 2017, found dead in his home, it is said by a heart attack. His body was quickly after cremated and thus prevented any possibility of an autopsy occurring.
https://www.globalresearch.ca/70-year-war-propaganda-built-cia/5708433

All Roads Lead To Dark Winter, Whitney Webb
THE LEADERS OF TWO CONTROVERSIAL PANDEMIC SIMULATIONS THAT TOOK PLACE JUST MONTHS BEFORE THE CORONAVIRUS CRISIS – EVENT 201 AND CRIMSON CONTAGION – SHARE A COMMON HISTORY, THE 2001 BIOWARFARE SIMULATION DARK WINTER. DARK WINTER NOT ONLY PREDICTED THE 2001 ANTHRAX ATTACKS, BUT SOME OF ITS PARTICIPANTS HAD CLEAR FOREKNOWLEDGE OF THOSE ATTACKS.

More Whitney Webb, and I am sorry to have forgotten who sent each of these stories...
Bats, Gene Editing and Bioweapons: Recent Darpa Experiments Raise Concerns Amid Coronavirus Outbreak

​Patiently Adapting
Posted by John Day at 6:57 AM